Today was a big moment in my life. My son played in his first T-Ball game. We asked him if he wanted to play baseball, he said yes, so we signed him up for the 4-year old T-Ball group. The first few practices have been interesting to say the least. Chris seems like he is one of the more advanced kids in the group, which makes me proud. When the other kids are making dirt angels, Chris is standing ready with his glove. Awesome. 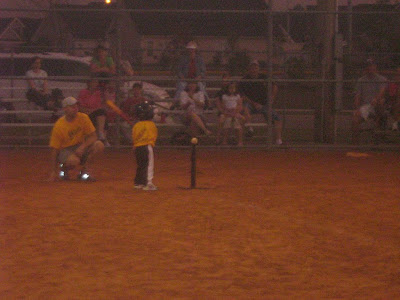 Chris bats left and throws left, which is cool. I do everything but throw left-handed, I guess that makes me weird. 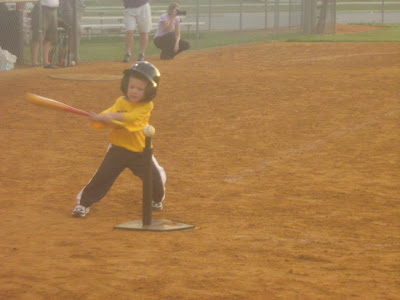 Coach forgot Chris batted left-handed. No big deal though as Chris scorched a single up the middle. 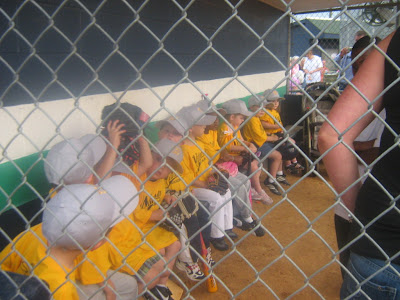 Here are your Zaxby's Kickin Chickins. 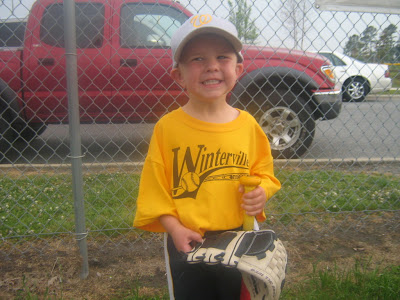 My little buddy ready for his first game. He left his glove at my parent's house, so we had to run out right before the game and get him another right handed glove... Those aren't easy to find either...
I'm so proud of my big boy!!!

Posted by William Regenthal at 9:35 PM

Awesome pics, its easy to pick out the t-ballers that actually want to play ball and the ones that want to pick flowers in the outfield. Seems like your boy has an aptitude for the game and can switch hit!

What position is he going to play, second base perhaps?

Excellent! Good for him and you must be a proud papa.

Thanks for all the comments guys. They had him play second base the first inning and first base the second inning. They play for 3 innings or an hour. We lasted an hour. They also don't keep score.

That's awesome!! I can't wait until my boys start t-ball!!