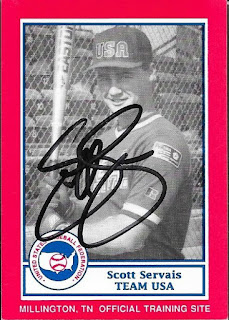 I waited a while for this one, but I finally got a TTM return from Mariners manager, Scott Servais.  This Team USA card that came out of a box that my wife picked up a long time ago as a Christmas gift.  She thought I didn't like the box, but I have kept it separate from all of my other cards and I pull from it for TTMs quite a bit.  I have added a good many cards to my album that came out of that box. 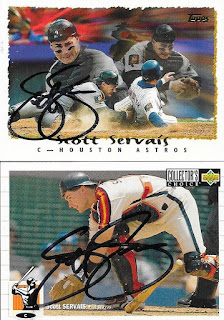 These horizontal cards have some really great photography on them.  When I am pressed for a decision on what to send out, more often than not, it is the quality of the photograph that is the deciding factor.  Sometimes it is the card set itself that decides, but strong photography is a plus.

Finally, here are three other cards that I had him sign.