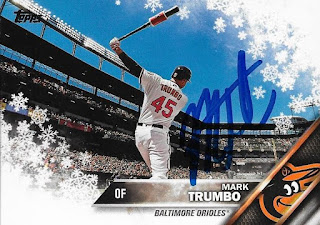 Another Orioles Fan Fest is in the books, and as far as sheer number of autographs go, I did better than any other Fan Fest. 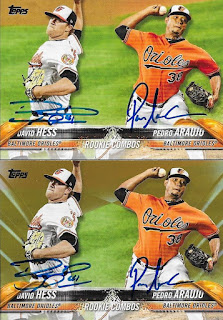 I had paid for 6 autograph sessions, and was able to get items done in each that I was really happy about.  Chris hit up the kids line several times, and this year was the first year where he had some cards that he strictly wanted to get done for himself.  He and I were accompanied by my good friend, Ryan, and the three of us had a really good time.  The above dual 2018 Topps Update Hess/Araujo was one of the many cards I was able to get signed that I was really excited about.

Dylan Bundy was really cool this year, and he pretty much asked me why I wasn't planning on going down to Sarasota for Spring Training.  Man, I wish I could, but that is something I really need to plan, and push for sometime in the future.

I got a ton of cards signed that I have had for a while.  I picked up the Diamond Kings Anthony Santander (above left) from the card shop last year, thinking that I would be able to get him.  Chris took care of that during the final kids session. 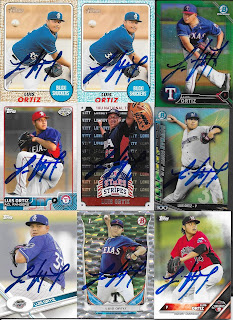 Luis Ortiz was really nice; probably the nicest of all of the players I met.  I was talking to Jimmy Yacabonis about my Wood Ducks hat, and Ortiz remarked that he was almost a Wood Duck.  I told him that I actually knew that, and that was why I ended up with so many of his cards.  We had him at that session, and saw him later on as we were walking around.  He signed everything Ryan and I handed him.

It was nice meeting former Orioles #1 pick, DL Hall.  I think he will be with Frederick this season, so I may be able to get him on some more cards later on.  He did strictly 2-per for Chris and I during our session.

I ran out of Keegan Akin cards, which was fine.  He was pretty nice, even though I overheard him telling one of the handlers that he wasn't having the best time.  I talked to him anyway about the weather, and he seemed to open up some.  He turned out to be a pretty nice guy. 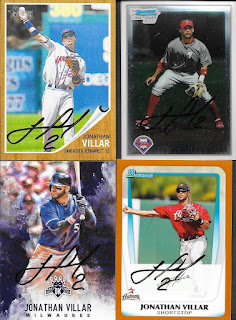 Jonathan Villar signed everyting I handed him, which was nice.  All of these cards are either card show or card shop pickups. 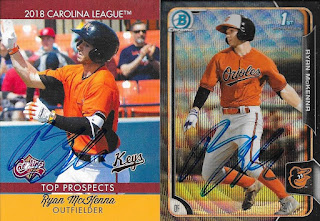 I was surprised that I still had Ryan McKenna cards left, but I purchased the Carolina League Top Prospects set at the end of last season, and needed him on that.  I found the black shimmer 2015 Bowman Chrome at the National last year, and was glad to get it signed.  It sucks that he had a dead Sharpie, though.

We had Renato Nunez in a signing session, and Chris also got him as he was out on the floor, so I got most of what I wanted done of his completed.  I missed the 87 Topps insert from a couple years ago, though.  Maybe next time on that one. 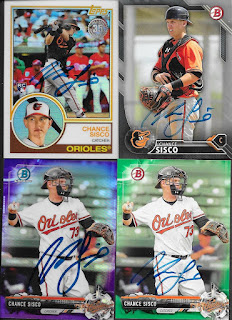 Chris got Chance Sisco during his first trip through the kids line, which helped me go ahead and get the high priority cards signed (see below).  He also was able to get him as he passed by us on the floor, which even further helped our cause.  Finally, in the paid session we had with him, Chris got two of Ryan's cards done, and I finished up a couple of the Bowman parallels shown above. 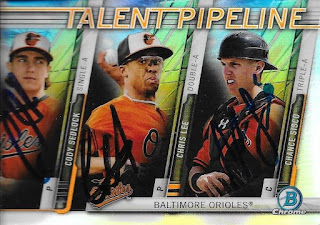 This Bowman Chrome Talent Pipeline was the highest priority card that I wanted Sisco to sign.  I was afraid that I wouldn't be able to finish it, but it turned out really well.

The Rule V picks were at the event, and I actually had a few cards of each.  Chris wasn't paying attention when he got these signed in the kids line, and smeared the Bowman Chromes that I had.  Oh well, they have a good story, now, as I got one of the smeared ones, and Chris took the other. 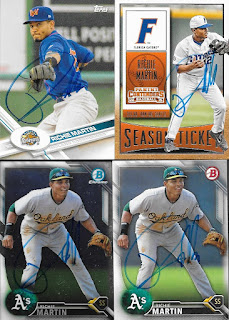 Richie Martin was pretty cool, and I got all of the cards I had of him signed.

I an mow out of Joey Rickard cards, as I had two paid session with him in them.  I had to take some cards from Ryan so I would have enough for each session. 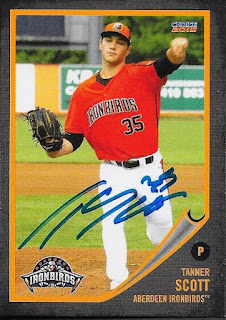 I was able to get Tanner Scott on this Aberdeen set card, which has been hanging out in my box for a while. 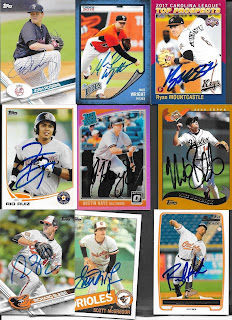 Normally, I would have fixed this scan where the Scott McGregor slid under my Richard Bleier, but I was over scanning by the time I saw it.  It'll just have to stay this way.  I was really happy about getting the 2013 Pro Debut Rio Ruiz signed, because of the small handful of cards from that set, I did, indeed, have the Ruiz in my box.  It would have languished there forever, so I'm glad I got it done. 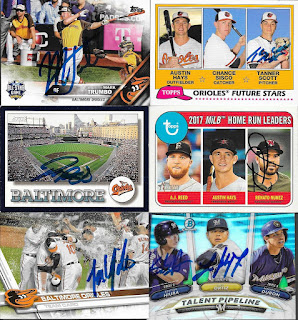 I had a multitude of horizontal cards that I got signed.  Another Talent Pipeline card that I can work on completing at some point.  I had a couple generic Orioles cards that helped with some guys I didn't have in my box, Donnie Hart on my 1994 Score, and Jimmy Yacabonis on my 2017 Topps.

I liked what I had for Rick Dempsey.  The 2004 Topps World Series Programs card of the 1983 World Series was a nice touch. 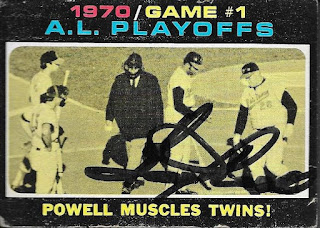 I got to talk to Boog Powell about horseradish again, which is always fun.  He's probably tired of my story by now, but he is a super nice guy, and the cards that I had turned out well. The 1970 and 1971 Topps cards that I had of Boog were beat all to hell, but they were the last of what I had that I wanted to get signed.  They turned out nicely, and will have a home in my album. 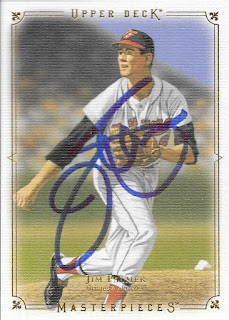 I laid a page of 4 cards down for Jim Palmer, and he signed this Upper Deck Masterpieces.  I'm glad he chose this card, because they really are nice, and the autographs show up well. 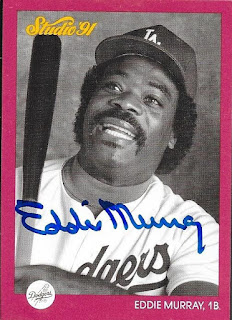 Fan Fest was plagued by an overselling of sessions for Eddie Murray and Brooks Robinson.  My Brooks session was refunded, and so was one session with Eddie Murray.  I had my friend, Rae, also picking up an Eddie session, which went through.  I used my opportunity to meet Eddie again by helping out a friend with his set that he is working on, since he helped me with my 87 set (by getting Tim Raines).  My good friend, Jacob, was surprised to find out that I was able to get his 1991 Studio Murray signed, and it will be sent to him shortly.  I also let Chris pick out a Murray that he liked, and that was what he got signed.

We all had a really good time at Fan Fest, but it did feel like it was missing something, which Ryan and I discussed on the way home.  This was the first Fan Fest that I didn't spend a dime.  I didn't get a chance to look through any game-used items, but I didn't have a whole lot of time.  Ryan said that he looked, and there really wasn't anything that really jumped out.  The normal pile of used jerseys wasn't there, which was a bummer.

Oh well.  I came away with 115 autographs one all was said and done, so that was pretty nice.  Ryan and I made a couple of trades, and I have some stuff that I can send to Max and Gerard for all of their help with their Fan Fests.  I also am really happy that I was able to help Jacob with a major piece for his Studio set.
Posted by William Regenthal at 9:02 PM