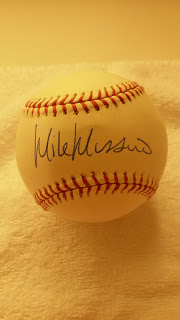 It took long enough, but I am happy to say that Mike Mussina is now a Hall of Famer.  He was one of my favorite players when I was growing up, and he is now going to the Hall.  I'm so happy.  It took 6 ballots, but Mussina squeaked in with 76.7% of the vote.

Moose becomes my 143rd Hall of Famer on a baseball.
Posted by William Regenthal at 6:40 PM