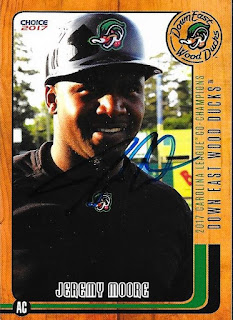 I am currently in the process of going through all of my card boxes in order to help my good friend, Jackson, in lining up cards for Arizona.  Apparently there are a few events going on there at the end of this month, and he will be able to take a ton of cards and get them signed.  This should help me with a bunch of 1987 guys, and has also helped me clean out some room in my card boxes.

Jackson (not the one who went with me to Norfolk; another Jackson) took some cards for me last year, and finally got around to sending a bunch of them back.  He was able to get Jeremy Moore for me during Fall Instructional League a few months ago.  I was hoping Chris's TTM to Moore would come back, but I am thinking that maybe it'll come back during Spring Training. 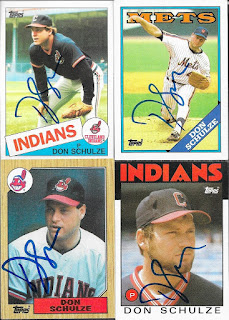 I had Don Schulze in my TTM box since 2016, but never sent out to him.  When Jackson asked me to look for his cards, it didn't take me long.  He got everything I sent signed, and also sent me extras. 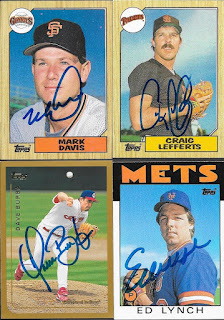 He tried to get an 87 Topps signed for me by Ed Lynch.  I didn't have one in my box, for some reason, so I had to rob from my completed set.  He got a card signed, but it turned out to be a 1987 Topps Tiffany.  Mine was still in his binder, so he will get that one done for me later on.  He did take care of Mark Davis and Craig Lefferts for me, though.

Thanks so much for getting these done, Jackson.  I hope you love the box I am about to send you.
Posted by William Regenthal at 6:14 PM