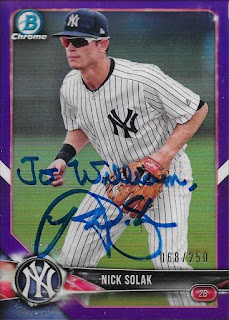 I hd this 2018 Bowman Chrome purple refractor of Nick Solak and was really glad to see that he signed TTM.  So, I powdered the card and sent a few others to him to get him to sign.  The card looks really nice.

He inscribed each card to me, which was a nice touch.  I was also glad to get my 2018 Topps Heritage Minors signed that shows him in a Biscuits uniform.

Solak (b. 1995) was a second round pick by the Yankees in the 2016 draft out of the University of Louisville.  He was traded to the Rays in a three-team trade also involving the Diamondbacks for Brandon Drury.