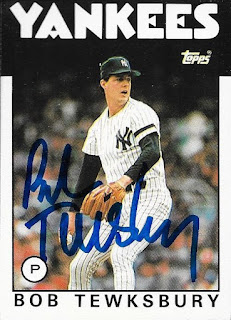 I had a TTM request out to Bob Tewksbury back in 2016 or so, but never got the cards back.  I saw that he was signing, so I tried again, and this time, the cards came back with no problem.  I got this 1986 Topps Traded signed, which turned out really well. 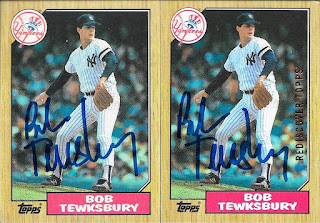 I also got these 1987 Topps done.  If you look closely, the one on the right is actually a buyback that I pulled recently.  I figured that I woud give it a shot and see if I could get both of them signed.  He did, and I am happy.

I mailed to Tewksbury on October 22 and got the cards back on December 15, for a 54-day TAT.
Posted by William Regenthal at 11:10 AM