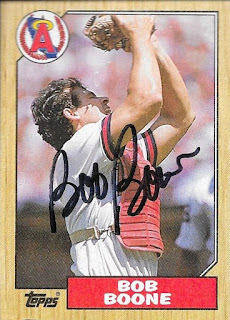 It took a while, but I got a signed 1987 Topps signed TTM from Bob Boone.  I had gotten one from my friend, Michael, and now need to get him the one he gave me back to him.  I told him I would, since he really didn't want to part with his in the first place.

I mailed to Boone on February 20 at Nationals Spring Training and got the card back on December 15, for a 308-day TAT.
Posted by William Regenthal at 3:47 PM