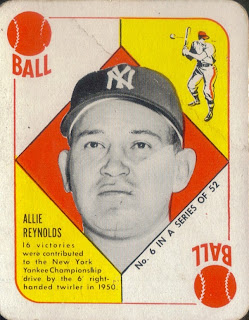 He appeared on 13 Hall of Fame ballots during his eligibility, yet only received a high of 33.6% of the vote in 1968.  He has been on a few Veterans Committee ballots, and still had not garnered enough support to gain entry to the Hall.  Why is this guy not in the Hall of Fame?  Your guess is as good as mine.

The Big Chief!! One of my father's favorite players. Thanks for posting it.