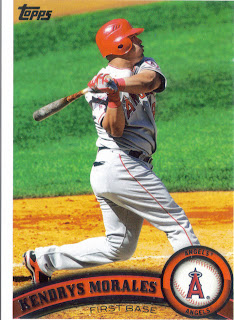 FINALLY!  It feels like it has been forever since I have completed a set (probably been since 2010 Topps Chrome?  I haven't checked...).  Anyway, I completed 2011 Topps by picking up 2 jumbo boxes at last weekend's card show.  I wasn't able to collate the set until this weekend because I have been really busy, but I finally got it done.

Cool thing is, I also had enough "rings" in the Topps Diamond giveaway to unlock a free set, so with that and the two I put together, I will have 3 2011 sets.

I have 59 of the 60 rings.  I still need the Mantle, and it is probably a long shot for me to get it, but man, how sweet would it be to get one of the 60th anniversary diamond rings?

So, I would be willing to trade or sell one of my hand-collated sets, in case anyone is interested.

I also have a partial (series 2 only) set that is missing maybe 20 cards or so.  I'd be willing to trade or sell it pretty cheaply.

If anyone would like any base cards that I have duplicates of, I have a decent sized stack of those as well.  I have already pulled most Tigers, Yankees, Dodgers, Braves and Orioles from that, but there may still be some stuff in there to be had.  I have a guy who buys a lot of commons from me at the shows, so make sure you put an inquiry in before he gets them (mid December is my next show).

Finally, I have a good many inserts and stuff that can be had via sale or trade.  Email me and let me know!!!
Posted by William Regenthal at 6:09 PM

Let me know if you can put together a Rays team set and what that would set me back.

Congrats on the set man, and good luck getting that Mantle!