Not only did I find two of my returned mailers in my mailbox on Saturday, I also found a bubble mailer from my Sportlots order.  I wanted to knock some set needs out and realized that I hadn't ordered from them in over a year. 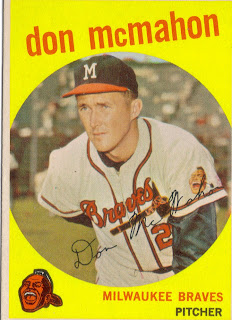 First off, I figured I'd knock a couple '59 Topps out.  I'm not officially pursuing this set, yet, but I saw that the seller I was buying from had these two cards that I knew I needed, so I added them at the last minute. 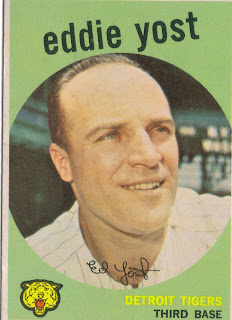 I'm not sure why, but I'm liking the mint green of this Eddie Yost card.  I prefer the more vivid colors in this set (especially the red ones), but this color is actually pretty nice.  I think, aesthetically, 1959 might be one of the best looking sets.  I'm also a fan of 1954's look, too.  You all also know my affinity for the 1955 release. 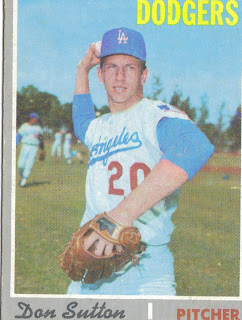 I knocked several 1970s off of my list, the most prominent was this Don Sutton.  We go from the awesome look of the 1959 set to the rather blase 1970 set.  I don't mind the gray, but it's kind of blah.  I've warmed up to it since I have been putting it together though. 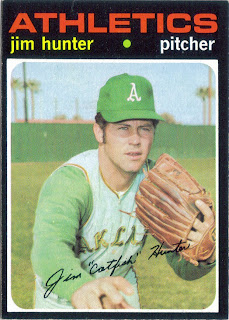 I picked up several 1971s as well and this group had a good many Hall of Famers.  First was this Jim 'Catfish' Hunter.  A really sharp looking card (which, incidentally, I already had, oops). 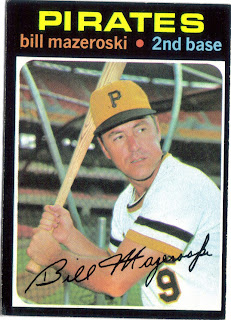 I replaced the Mazeroski that I already had in the set.  That one was very rough looking and this one is much sharper.  The Pirates uniform really looks good with the black border of this set. 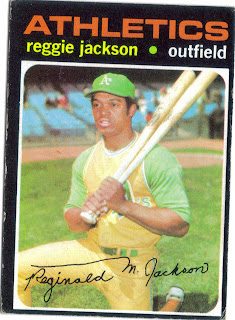 Finally, one of the bigger cards I got was this Reggie Jackson.  Wow, what an awesome uniform.  I got this card for $8.00.  Not bad, I've seen it go as high as $20.  This one is far from mint, but it fits right into the set.

In addition to these cards, I also knocked 3 cards off of my friend's 1963 Fleer want list.  Always good to be able to chip away at what he needs as well.

If you guys haven't tried Sportlots yet, I highly recommend.  They are awesome if you need a few more odd cards to complete a set.
Posted by William Regenthal at 8:00 AM

Like the Yost too bad you're building the set.