The second baseball I got on Saturday was from former Oriole Jim Gentile. 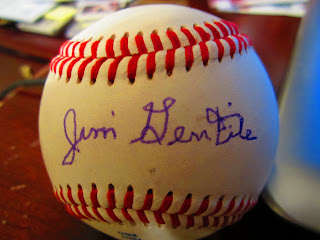 Gentile (b. 1934) played in the majors from 1957, 1958, 1960-1966 for the Dodgers, Orioles, Astros and Indians.  He was runner up to former Oriole Ron Hansen (and was also tied with another Oriole Chuck Estrada) for the 1960 AL Rookie of the Year.  According to Baseball-Reference.com, three Orioles finished with voted for Rookie of the Year, Hansen was first and Estrada/Gentile were tied for second... no one else got votes.  Weird.

Gentile would have an amazing 1961 season where he would hit 46 home runs and would lead the league with 141 RBIs.  He finished third in the MVP voting behind Roger Maris and Mickey Mantle (Gentile didn't stand a chance did he?).

Gentile played for only 9 seasons in the majors, but was productive for only 5 or so.  That 1961 Season would be good for MVP most other years, but that year was one for the ages in Maris and Mantle's pursuit of the single season home run record.

Gentile is my 35th TTM success.  I mailed to him on June 24th and got the ball back on October 15th.  He was a little under a 4-month TAT.

Posted by William Regenthal at 2:00 PM