I was so busy today with little odd jobs around the house that I forgot to check my mail until well after 7PM.  When I got the the mailbox, I opened it and said "Oh cool, I got a ball... no wait... 2 balls... no wait... some cards too!  AWESOME!!!

Here is the first of the two TTM successes I got today: 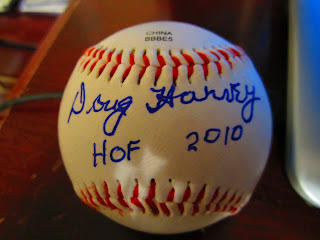 Hall of Famer Doug Harvey!  Harvey (b. 1930) is one of only 9 umpires in the Hall of Fame.  He umpired in the National League from 1962 to 1992 and was one of the last umpires in the Majors who did not attend an umpiring school.

Harvey makes my 49th Hall of Famer and my 34th TTM success.  I mailed to Harvey on June 20 and received it today, October 15 making him a 4-month TAT for me.  I had almost given up on the ball, but am glad that it finally came.  I'll post the other ball I got tomorrow with the cards to follow that post.
Posted by William Regenthal at 8:19 PM

Nice! do you know who is 1st or 2nd on the umpire list?

I went back and looked, did some research and he was third at the time he retired and was passed by Bruce Froemming. So, he is 4th (and I changed it in my post). They are ranked: