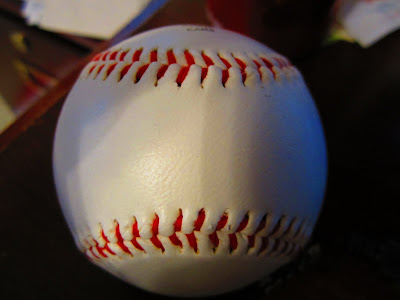 I attempted to do a TTM to Emilio Navarro back in April, only for him to pass away while my ball was on its way from NC to Puerto Rico where Navarro had lived.

I thought getting Navarro would be cool because at the time, he was the oldest foemer professional baseball player at 105 years old. He played in the Negro Leagues, but not in the majors.

I was saddened to hear of Mr. Navarro's passing and figured that I'd never see my ball again. A few weeks passed and one of my mailers appeared in my mailbox. I opened it, thinking that it was going to be one of my HOF TTMs, but instead, a blank ball was inside. I wasn't sure what to make of it, but deduced that it was, in fact, the ball that I had sent to Navarro.

I thought about sending the ball out to someone else for TTM, but my friend Matt posed a different idea.

He said I should leave the ball the way it is. The box wasn't RTS, it was physically opened in Puerto Rico. It looks like Navarro opened the box with the intention to sign the ball, but didn't get to. So, the ball can stand as a symbol of Navarro's unfinished business and I will keep it with the rest of my autographed items. It will always have the story of ALMOST making it there in time for him to sign.
Posted by William Regenthal at 7:38 PM

Very nice idea man, way to respect the effort he put in for all of the fellow collectors he signed for. You know he would've signed for you if he had a few more days in him.