I used what was left on my Ebay gift card to pick up this 1933 Goudey Rick Ferrell. This is the first Goudey card that I have picked up, so I wanted to make it a Hall of Famer. 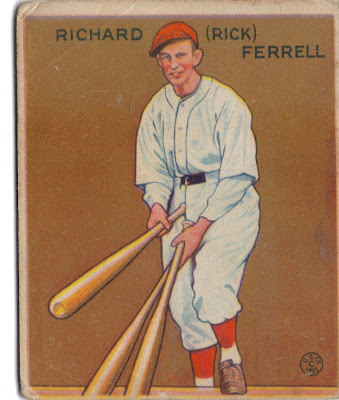 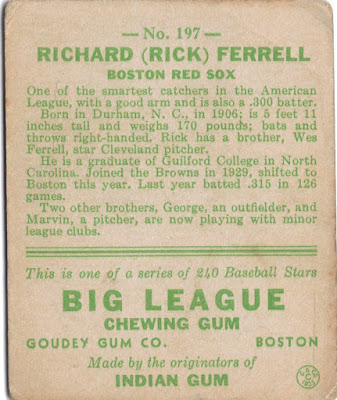 Ferrell is a native North Carolinian; he was born in Durham and grew up outside of Greensboro in Guilford County.

After doing a little more research on the card, I found out that this is, in fact, Ferrell's rookie card. So, it appears that with a $25 Ebay gift card, I was able to knock out two Hall of Fame rookie cards. A former Oriole and St. Louis Brown. Not too bad.
Posted by William Regenthal at 8:34 PM

Agreed, great pickup! Ferrell's post-playing career as an Detroit executive and favorable makeup of the Vets committee also had something to do with his selection. This page breaks down Rick's context in pretty good detail.

Rick Ferrell in the HOF