I have finally gotten a chance to post the cards I got from Ryan in a mega trade at the card show a while ago. It is always nice to meet a fellow blogger in person, and it was especially nice since he and I both are Orioles fans. Ryan was able to take some old O's cards off my hands and help me create room in my O's box in exchange for some cards of players who I really like. 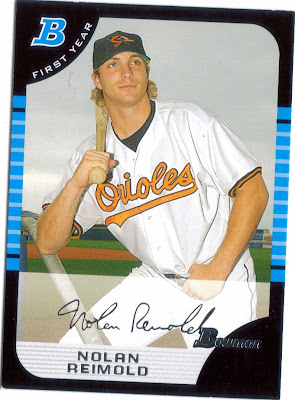 I was able to add some Nolan Reimold cards from early in his career. I'm a big Reimold fan, having met him in person last year. I hope he can realize his potential, but I don't know how much playing time he will get with Felix Pie clogging up a spot on the roster. As you can see, Pie has fallen out of favor with me. 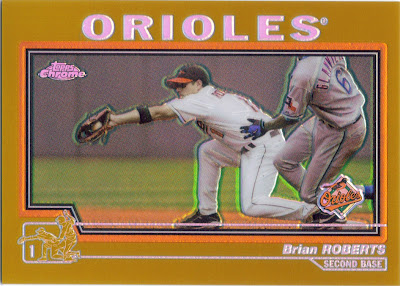 The season has been a lost one for my favorite player, Brian Roberts. I am still going to be adding to my Roberts PC anyway. I didn't have this 2004 Gold Topps Chrome. I think these cards looked awesome, by the way. 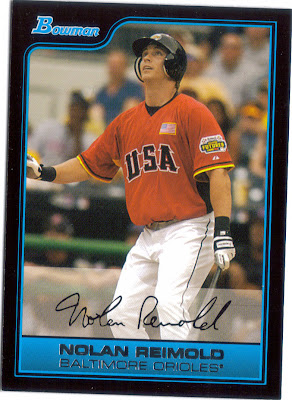 Here's another Reimold, this time when he was on Team USA. I had forgotten all about that. Nevertheless, I was glad to add this to my collection. 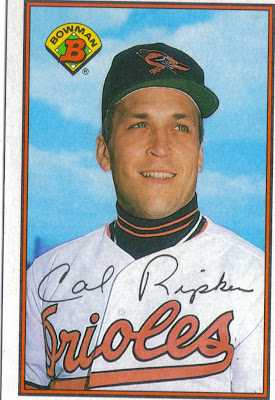 I'm certain I had this card somewhere, but I loved the way it looked, so I added it to my pile. Cal is always a plus and with this sharp design of 1989 Bowman, I was glad to add it. I know the one I had before was in kind of rough shape, due to the 89 Bowman's exaggerated size, but I immediately put it in a top loader so it would fit in the box with the rest of my collection. 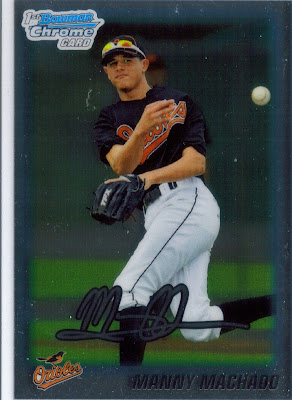 Ryan had a good bit of Manny Machado Bowmans cards in his collection that he was willing to part with, so I added 3 versions of it... The base, the chrome and the gold. 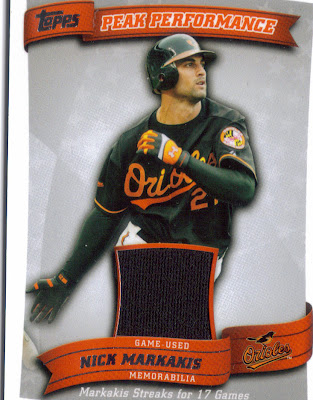 I added this Nick Markakis relic to my collection. Nick has had an uneven season so far, but I think by the time the season is over, his stats will match up with his career numbers. He did collect his 1,000th career hit this season and is one home run away from 100. Not bad for someone who has only been in the league since 2006. I wish he would hit for more power, though. 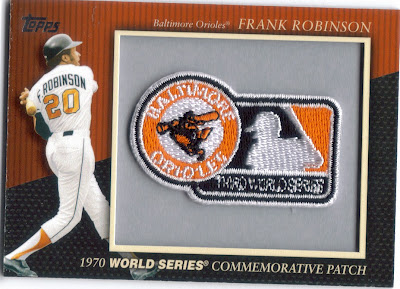 I got this Frank Robinson patch, which was cool. I have plenty of Brooks' stuff, but not nearly enough of 'the other Robinson.' I believe Frank is underrated among the all time greats of the game, and was overshadowed the past decade as tainted sluggers passed him on the all-time home run list. 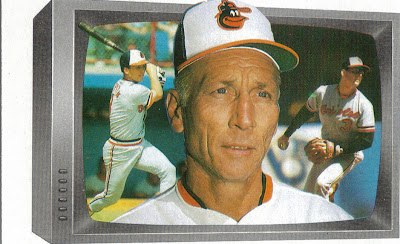 Finally, I added a card of Cal, Sr. A baseball lifer, Cal, Sr. embodied what was known at 'The Oriole Way.' A no-nonsense hard-nosed style of play that a lot of O's players could benefit from. I doubt the O's will get back to the level of excellence they had from the late sixties to the early eighties.

As you can tell, I'm still upset over the O's current play as of late. I'll get over it, but it has been a real hard season considering the raised expectations brought on by the end of last season and this offseason's signings. Oh well. There's always 5 years from now...

Thanks for the awesome trade Ryan! I hope to see you again at the next show!
Posted by William Regenthal at 8:13 PM

I'm glad you liked the cards! Its neat to see what others say about the cards you traded to them.

BTW, as bad as the O's have been this year, they are still about 15 or 20 games better than they were last year!

You're right! Koji has been a very nice surprise. Arrieta has been decent. Wieters is improving. I guess hoping Lee and Guerrero would improve was asking a lot, but had another team taken them, they'd both be hitting 40 homers and .330 right now.