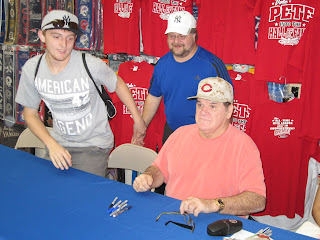 The first thing we did today while visiting Cooperstown (after checking out a card show, which I will talk about later) was to arrange for Drew to meet Pete Rose.  As you can see above, Drew and his dad paid for a photo op with Rose which turned out really well for me too. 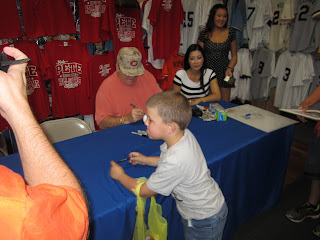 As I was taking pictures for Drew, Chris snuck in there with a ball and a pen and got a signature from Rose.  Rose was really nice to Chris and even fist bumped him after finishing the signing.  The best part of the signing, though, was while we were waiting for Drew's photo to be developed, so Rose could sign it.  Chris plopped down beside Rose, to which Rose replied, "Hey Chris!" 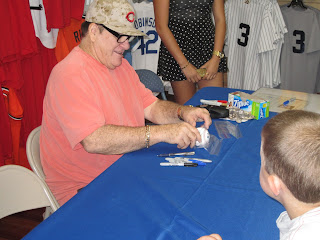 Yeah, my son just sat beside Rose and hung out for a few minutes.  It was pretty surreal, to tell you the truth.  Chris was pretty bold to just take a seat there, but it was really awesome of Rose to acknowledge him and be ncie to him. 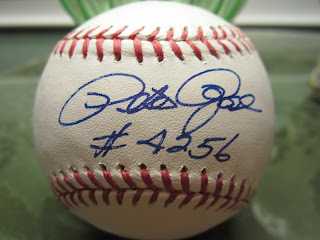 Here is the signed ball that Chris got.  I will hold onto this one for him.  It's his ball, since he had the guts to just ask for it.  I'm really proud of Chris for not being shy.  This was such an awesome way to begin our day.  Stay tuned for the first Hall of Fame signed baseball that I picked up today.
Posted by William Regenthal at 10:12 PM