My main goal when going to the Tides games was to try to get an auto of Nolan Reimold. Max and I both became fans of him last season when he made a legitimate run for Rookie of the Year.

We both have Reimold shirts and had big expectations for him this season.

Nolan had offseason heel surgery (he played all of last year in pain) and had hoped to be full go this month. For some reason, he was rushed back (probably because the Orioles have had so many injuries and are depleted as far as outfield depth) and has had a horrendous season.

Reimold has been optioned to AAA Norfolk and is carrying around a .180's batting average. Being the true fans that we are, Max and I still like Reimold and hope he regains his 2009 form and gets back to the majors quickly. 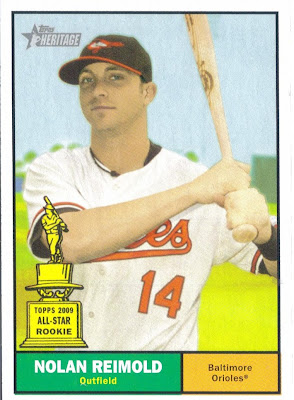 After Wednesday's game, I was able to meet Nolan and have him autograph two baseballs. He was really nice and chatted with me for a bit. I asked him how his heel was, he said it was fine but still sore. I told him my best friend and I were big fans and hoped he made it back to Baltimore. He said 'I hope its soon...' I imagine that he has to be scuffling because he wants to desperately help the team, and may be pressing too much, especially is his foot is still sore... 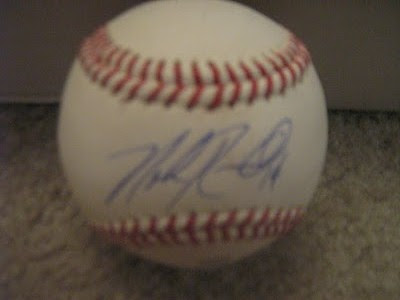 After Thursday's game, I waited again forn Reimold, this time with the intention of getting my picture taken with him. When he emerged from the clubhouse, I asked Nolan if he would indeed pose for a picture with me. He agreed and I was able to get the below picture taken. Thanks to Kam Mickolio's wife for taking the picture for me. She's hilarious by the way. 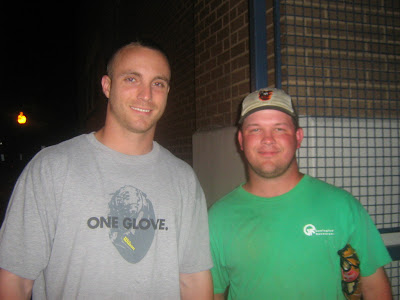 So, this concludes my posting on my trip to Norfolk; I hope you all enjoyed. It was a tough trip because I worked my tail off during the day in order to make it to the games at night. I am really lucky I have a supervisor who cares enough about me as a person that he worked it out so I would be able to go. That really meant a lot to me.
Posted by William Regenthal at 9:41 PM

Cool story, man. Glad you got to meet him and he was a very cool guy.