I met Dave Trembley in 2007 while he was still interim manager for the Baltimore Orioles. I was impressed at how well the Orioles had been playing since Trembley took over and as he signed the baseball I handed him, I told him so. I also told him that I had hoped that the Front Office would keep him as the manager full-time soon after. He smiled and said... 'Thank you, and if they don't, then that's ok too.'

In my mind, that was a classy answer from a very classy man. 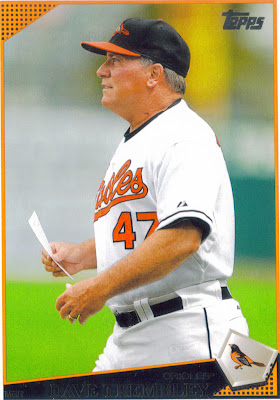 It is not Dave Trembley's fault for the bowling shoe tendencies that this season has shown. Sometimes change for changes sake helps a team (see last year's Colorado Rockies), but all signs point to more of the same as this season progresses...

I was not sad at all when Lee Mazzilli was removed in 2005 (I never wanted him here in the first place) and I was calling for Sam Perlozzo's head after the Mother's Day Massacre of the 2007 season. When I began to see the reports today that Trembley is about to be removed as manager, I felt nothing but sadness.

Part of me feels like they are doing Dave a favor. This team is bad. I mean Ashton Kutcher movie bad. He can take the rest of the summer off and reflect that it wasn't his fault that he was handed a team that was to be measured on wins and losses, but lacked talent in a lot of areas and carried a lot of IFs into this season.

The Orioles players should be ashamed of themselves. Some random thoughts on the 2010 Orioles:

This season was a wash after the first two weeks. It has been very hard for me to watch. I have been losing interest all around. The blog, fantasy, any other games, etc. I haven't even voted for the all star team. I started the other blog with Max to try to keep interested and that is slipping too.

If it weren't for Max, I think I'd have given up already. Thanks buddy.

Anyway, back to Dave. Apparently the Orioles plan to replace Trembley with 3rd base coach Juan Samuel. I have been unimpressed with him as a coach so far.

Something that really has bothered me was that certain people in baseball have criticized Dave Trembley because he never played baseball. He has a Masters in education and started out as a high school teacher and baseball coach in the late 70's. He moved on to coaching a small college in LA and then became a scout for the Cubs in 1984. He worked his way up through the minors as a manager, specializing in the development of younger players (a key in his hiring as the Orioles manager). This is a guy who spent 20+ years in the minor leagues as a scout and manager who finally got to realize his dream and become a Major League manager.

I'd really like to see him get reassigned in the organization, but I highly doubt that will happen.

I don't feel too bad for Dave beacuse for almost 3 years, he got to realize his dream and be one of only 30 managers in MLB. I do feel bad for him because is has been a very classy person and deserved much better from the Orioles players and their Front Office. The players and Andy MacPhail better lose some sleep over this.

I now close with an exceprt from Roch Kubatko's blog on masnsports.com "I will say before turning off my laptop, that Trembley is a good man who loves the Orioles as if he grew up rooting for them. He lived and breathed this job. He also cares a great deal about the fans. It isn't just for show. I hope that means something to even his harshest critics."

Good luck Dave. I hope the past few months haven't quieted your love for the game as they have for me. I hope to run into you one day and offer you a beer. Also, thanks for being nice enough to sign a ball (2 of them) for me and talk to me for a few minutes. That, I will never forget.

Posted by William Regenthal at 10:40 PM

As someone who has interviewed Trembley several times (he is from a town just down the road from me), I know that this will not crush him. He has always performed to the best of his abilities and worked his darndest. He is one of the winningest minor league managers of all-time. He has nothing to prove.

This is a man who taught inner-city kids in Los Angeles. He's not afraid and he will move on with head held high (or maybe he will even retire -- as he's mentioned it before).

It is so weird, because the Orioles had such promise to be a Marlins-esque team at the start of the year.

This is probably your best post yet. I enjoyed reading it.

Thanks guys. This season really sucks. Also, P.A., thanks man for everything you do for me as well, I don't say it enough.