After weeks of delays, my jumbo boxes of '10 Topps finally arrived at the card shop. Pete, Max and I went in together on a case + 1 box. Max, having prior school commitments, was unable to attend the box busting event. He will come and collect his 2 boxes soon. Pete also got 2 boxes, while I got 3 of them.

Here are the results of our box and pack busting. (as a teaser, Pete brought in 8 packs for me a few weeks ago, while I bought a blaster from Target shortly thereafter... 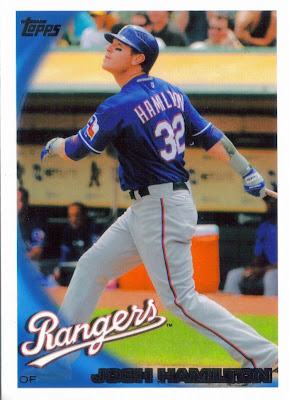 The first card from the first pack in my jumbo box. Josh Hamilton. I usually like to post a completer card when I finish a set, so I thought I'd show the official 'starter card.' I don't count the ones from my Target packs, as they were only a teaser. Its my blog, my rules, hahaa. 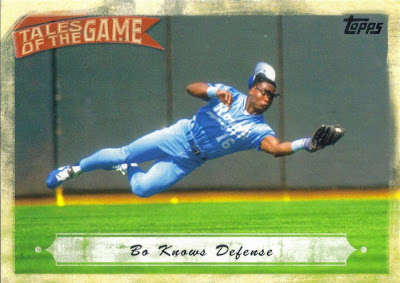 I think there were maybe a few too many inserts in this year's offerings (Toppstown again, really?) However, anytime you can pull a Bo Jackson is a good time. Bo knows your mom. 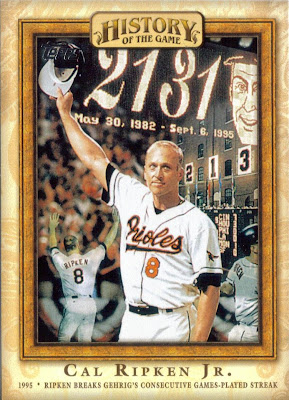 Check it out; got another Cal I didn't already have! F yeah!! I love 2131. I cried while watching that game. I'll admit it. 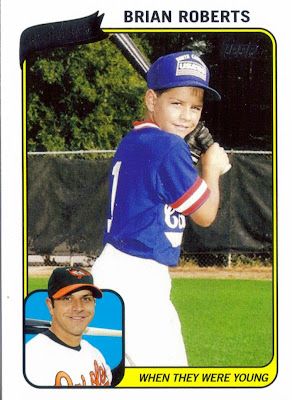 I like the idea of cards of the players when they were younger, I have a Brooks Robinson from 1972 with the same theme. It was awesome to be able to get a Roberts from this, seeing as he is my favorite current player. Awesome!! 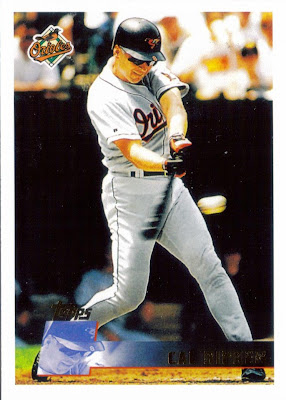 Another cool idea for this year, The Cards Your Mom Threw Out. Of course, if you know my mom (she reads this blog), you know she would NEVER throw out my cards. She actually has her own collection. However, I do get Topps' point. Love the idea. Another Cal I can add to the growing collection... Thanks Pete for this one. 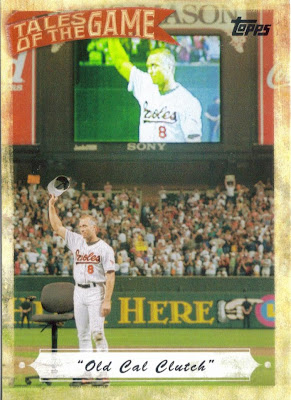 Hey, look. ANOTHER Cal!! Heck yeah! Since Roberts, Reimold, and STICK weren't included in Series I, I can take comfort in that I got some Cals. 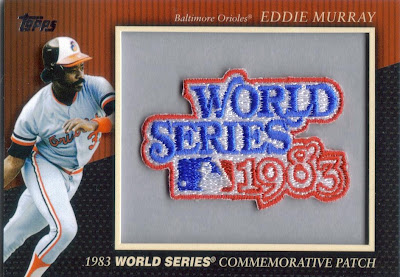 Traded Pete 2 Gold Yankee cards for this Murray Commemorative Patch. Can never have too many Eddie Murray cards. 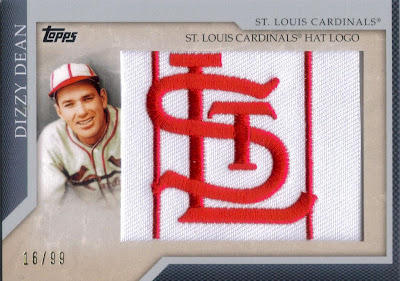 Ok, just so you know, I freaking love the Hat Logo Relics. My first hat logo was this awesome Dizzy Dean St. Louis Cardinals logo. Love the colors and stripes! 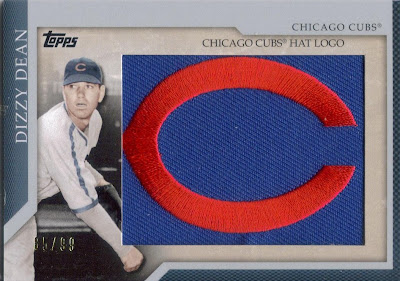 Hey, look. Another Dizzy Dean. I guess I need to be a Dean fan now, huh? Still pretty cool card. 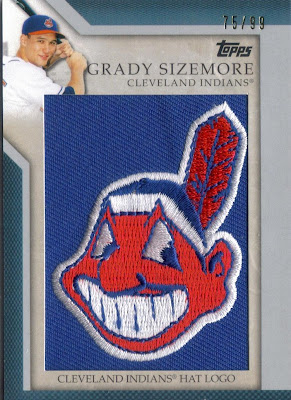 Hahahaha, Grady Sizemore. I actually like Grady, even though I have seen a lot more of Grady than I normally would like. Ahem. Anyway, yeah, sweet Indians hat Logo Relic. Not too bad. 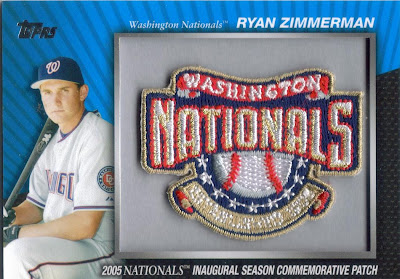 Here is the Commerative Patch I got out of my Target Blaster. Ryan Zimmerman. Yay. Uggh. Anyway, I'm still bitter that he was the North Carolina card in A&G last year, and not Roberts. Zimmerman is actually a good player. Who knows, maybe the O's will get him at some point. 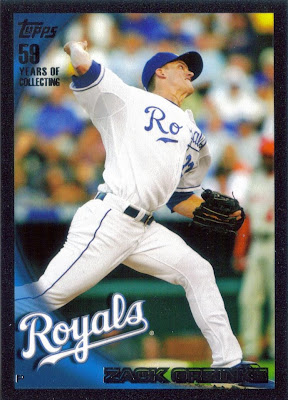 Not a bad choice for a Black Border Parallel... Greinke. I'm glad he was able to overcome his personal issues and win the Cy Young Award this year. Especially on a bad team like the Royals. 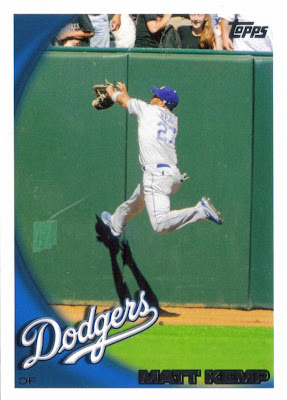 Ahhh, Matt Kemp. I know someone who really likes this guy... Wonder who... Just a nice action shot. I also think Kemp is a great player. 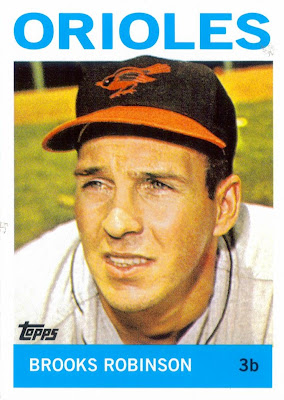 Speaking of great players... A CYMTO Brooks '64 Topps. Awesome card, and I think you all know how I feel about Brooks. 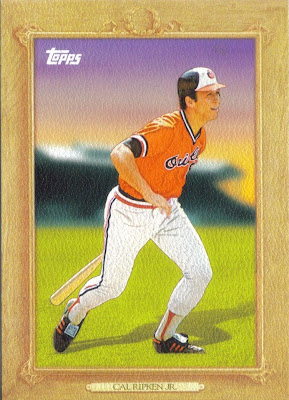 Mmm. Look! Another Cal. Ahhh, nice, especially in the retro jersey. Very nice. I like the Turkey Red inserts. 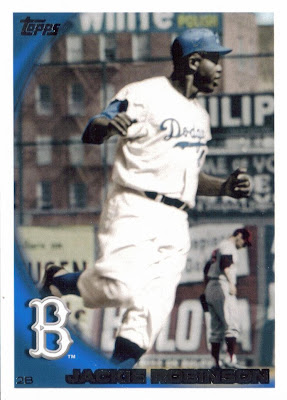 I GOT A SP! I know one person who will not get this card.... Pretty sweet Jackie card. I'm glad my best friend is a Dodger fan, that makes me appreciate Dodger cards even more. Especially Dodgers of the past.
So, my thoughts? I was very pleased with my results. I was displeased with the few cards that were mis-stamped, I ended up losing about 50-100 cards total out of 2 of the boxes. I did some thinking about it, and figured, this is much like off-centered cards of the past and will probably send some out to player collectors as throw ins and give some to Chris for his card album. He doesn't care that the names don't match up perfectly...
Ok, so here is my breakdown from opening 30 jumbo packs and 18 Target packs (8 from Pete, 10 from the blaster)
2 - Complete Sets of Series I
1 - Commerative Patch (Zimmerman)
4 - Target Red Backs
10 - Target Retros
31 - Million Card Giveaway Redemption Cards (love this btw)
7 - Topps Attax Code Cards (Why??????)
34 - Legendary Lineage
1 - SP (Jackie Robinson)
49 - ToppsTown (ugggh)
35 - Turkey Red (Yaaaaay!!!!)
2 - Black Border Parallel
36 - CYMTO
5 - CYMTO with stats on the back
3 - Hat Logo Relics
31 - Gold Parallel
37 - Peak Performance
34 - History of The Game
33 - Tales of The Game
16 - When They Were Younger
4 - Relics (Asdrubal Cabrera, Tommy Hanson, Fukudome, Cole Hamels)
2 - Autos (Bobby Parnell and Josh Johnson)
Not too bad... Thoughts??
Posted by William Regenthal at 8:29 PM

Nice Break! I like the insert sets this year also. I did a one box break of jumbos and have the results over on my blog. Check it out if you want.