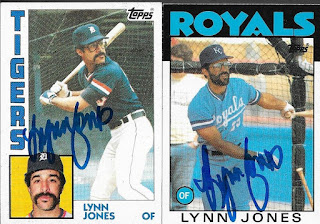 I received a TTM success on April 1 from Lynn Jones.  I mailed a 1984 and 1986 Topps to him on March 25 and got the cards back 7 days later.  Most of the TTMs I have gotten seem to take around 7-10 days, which is nice.  I have a few more that I am ready to send out, but I have others that I would like to find some more cards of, so I've been looking for bulk Topps stuff lately.