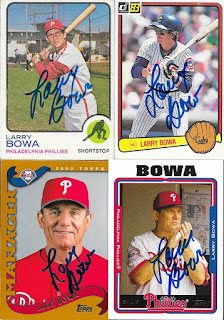 I got a TTM success last Friday from former player and manager, Larry Bowa.  My good friend, Max, had told me that I should look for some of Bowa's cards, and luckily, I found these four to send.  I was able to get my first 1973 Topps signed, thanks to Max's suggestion.