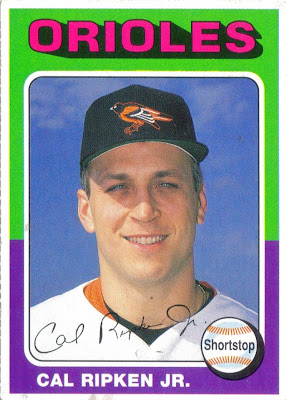 Like I said before, I listed almost my entire Cal Ripken collection (close to 500 cards) on Zistle the other day. While doing so, I found a few 'Random Ripkens' that I'm sure that not a lot of Ripken Collectors have. The above 1990-1991 Topps Magazine Cal Ripken is one such card.
From what I can vaguely remember, this was one of the first Cal Ripkens I owned. I'm sure many of you know the story behind how I became an Oriole fan....
.
I began to like the Orioles when i was 7 or 8 and was playing the old school Nintendo game (the one with the fat little dudes...). My brothers would always pick the Oakland A's because that was the best team on the game (this was back when McGwure and Canseco were HOT... why anyone would be a Canseco fan is beyond me, but anyway). Me being the smallest of my brothers, I was pretty much forced to sit back and watch them play the game until one of them got bored and I would finally get to play. Naturally, I was never allowed to pick the Holy A's, so I had to go with another team. I really dug Baltimore because their players had these kickass neon freaking orange uniforms, and I thought they looked awesome. The little fat players looked like orange creamcicles. Haha.
.
Anyway, I told one of my older brothers, John, that I liked Baltimore when he asked me what baseball team I liked. You see, according to my brothers, it was uncool to copy one another, so I was disallowed to pick a team that one of them liked; for example, John liked the Red Sox, Philip liked the Giants AND the A's (how unfair), Mom liked the Yankees, etc. So, thinking back on the game, I chose Baltimore.
.
In a rare moment of John and I getting along back then, he says 'You like the Orioles huh? Well, here is a stack of cards of their best player...' He handed me a stack of Cal Ripken cards. Boy, did I score in the end. John did pick a good one to follow in his own right, he being a huge Wade Boggs fan...
.
So, there you have it, I will always have to give credit where it is due in that my brother John is solely responsible for making me a Cal Ripken fan. Of course, Cal did a good job in keeping me interested throughout his career. I could have done much worse... Back then Philip was a huge Matt Williams and Will Clark fan... they don't quite cut it if you know what I mean. Since then, he has ditched his A's and Giants and sold his soul to become a Yankee fan (I think mostly to give me a hard time).
.
Just an FYI, my younger sister came along later and picked up the McGwire/As torch and ran with it for a while, although she, now, along with my younger brother like the Braves. Now, Andy, the youngest boy of all of us has stated recently that he has chosen the Rangers. Not too bad.
Posted by William Regenthal at 9:59 PM

Wow. I love that Ripken card. I've never seen it before. I only found one guy on Ebay selling it though. $7. Too steep for me. Darn.

Wow, it's selling for that much? Maybe you should try searching for the actual magazine? I never knew it would be that expensive.