I wonder if you guys knew this...

I have been posting about baseball cards since January, and I believe I neglected to let something out..... If you go on Beckett.com and search for my last name, some cards come up... Here is an example: 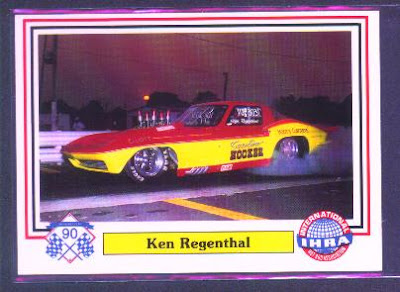 That is correct. My dad is listen in Beckett Racing! This 19-year old card is one of two cards of him in the 1990 Checkered Flag IHRA set. He was also featured in the 1989, 1991, 1992 Checkered Flag issues, as well as 2 cards in the Advanced Images 1992 Quick Eight set. I have each card, but haven't gotten around to scanning them. This photo was actually lifted off of an ebay auction, I paid $0.50 to get my own Dad's card, haha. I had to. The ones I got when I was 10 (when this one came out) all got beat up. I had to get the 1989 one from Beckett because someone at the track way back in the day took the whole stack we were handing out. Lame. Anyway, when I think about it, I'll bring them back with me and scan the cards for you all to see.
Posted by William Regenthal at 9:49 AM

You should do the following with a copy of that card.
A. Pull a hair from your dad's head
B. Have him autograph a index card
C. Place freshly removed hair on index card near autograph
D. Cut out picture of your dad's car and place on index card
E. Sell index card as autograph DNA relic card on e-bay

Yes, but only have the tires of the car showing, that was it can resemble a Razor Cut signature card.