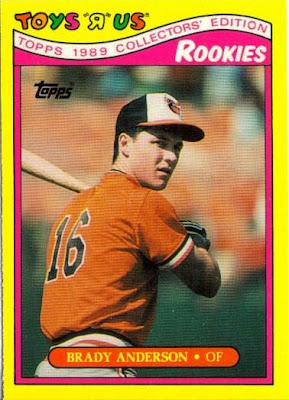 Yep. BRADY. Can't say it enough. Lets put all the steroid controversy aside for a minute and reflect back on that 1996 season. Ok, lets not reflect too much because I may want to pick up a shovel and hit a 12-year old Yankee fan with it. Ugggh. Just got chills. No, lets talk about BRADY.
Everyone that knows me, knows that Cal Ripken was my favorite player growing up. THey also know that I liked other players, such as Kirby Puckett, Nolan Ryan, Etc etc. What some may not know is that aside from Cal Ripken, Brady Anderson was my favorite other Oriole back then.
In 1996, Brady hit 50 home runs (an Oriole record), had 110 RBIs, 21 stolen bases and a 0.297 average. Very nice numbers. Now, he would never even come close to those numbers again, but for that one season, Brady was a super star. The Orioles rode that season to a wild card finish and ended up against the Yankees in the 1996 ALCS. This would definitely be a dream matchup for me, as you all know that I have a severe dislike for the Bronx Bums... er I mean Bombers.
So, my brother John told me he came upon a foot locker full of cards this weekend, and when he told me he found a Toys R Us Brady Anderson RC, I had to have it. Not bad at all! I wish Brady had been able to sustain better career numbers, but injuries kept him from doing so. We can speculate on why this was so, but lets not and say we did. Allow me to keep one of my idols I had as a kid, since some of the others have soiled their names...
Posted by William Regenthal at 5:20 PM