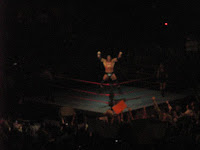 Not the best picture, but it is of HHH when we went to RAW in November 2007... I have a busy weekend planned, and this is following the awesome time I had hanging out with my best buddy Max this week as well. Went to Piedmont Dragway today and watched Dad do a burnout and then get pushed back off of the track due to water leaking from the car onto the track. When they got back to the trailer, they found that a push rod in the engine was broken, so their weekend was over.

Mike is coming over tonight so we can watch Stone Cold get inducted into the WWE hall of fame. Good times.

Tomorrow, we will have pretty much an all day long get together celebrating the 24th anniversary of Wrestlemania (for some dumbass reason, WWE is billing it as the 25th anniversary, you don't celebrate your first wedding anniversary the day you get married do you?). I hope everyone enjoys themselves tomorrow, I know I will! If you would like to attend, call my cell!