The future is WOW

Worst blog title ever...
After P.A. told me that SI gave the Orioles an offseason grade of C-, I began thinking about the group of young players they have assembled for Spring Training and the fact that the O's have extended Brian Roberts and Nick The Stick's contract's, I would give them an A. I am more excited about this year's spring training that I have ever been. I'm not expecting the Orioles to contend this year, but I do know that a fre years from now when they WIN the world series, they will be pointing back to this offseason as what got them there.
Anyway, I went through some of my O's cards and pulled some of the guys who I think will be there when the O's do pick up a ring...
Brian Roberts: 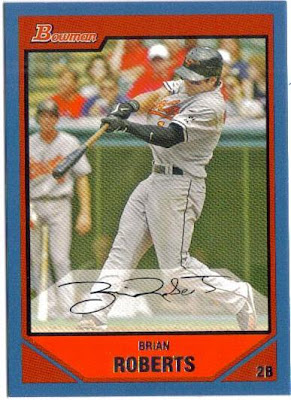 Yes, I'm biased, but he IS my favorite player right now. I predict he'll have a good season this year, with probably a .290 avg, 40 sbs and 48 doubles. Not bad for a leadoff hitter, huh? Of course he won't be elected to the all star team because all the Yankee fans will vote for Robinson Cano and his .240 average and you know Pedroia will be WAY up there too. 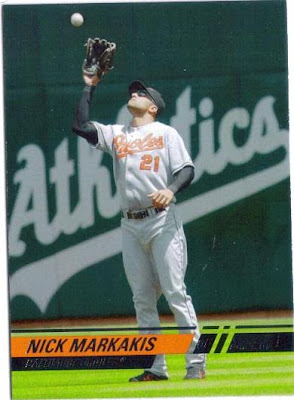 Nick Markakis: Can gun down Ichiro at home plate at Camden Yards from the Eiffel Tower. Man he has a cannon for an arm. I think he'll have a breakout year by hitting 30+ homers, making his first all star team and winning his first Gold Glove.... 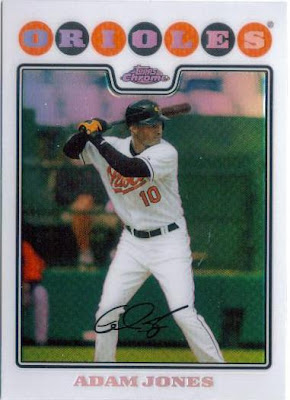 Adam Jones: Another potential gold glover in the O's outfield. He will hopefully hit 25+ homers this year, along with stealing 35+ bases. I anticipate that he will be the #2 hitter behind Roberts, so I think he'll get quite a few RBIs this year as well. I am still amazed that the Orioles were able to get Jones, Sherrill and others from Seattle for Bedard. Also, Bedard may be back next year... Without having to give up anything at all. Not too bad. I give the O's an A++++ for that trade.

Brandon Snyder: Unless he really surprises someone, he won't make the squad this year out of Spring Training and most likely will start at Double A Bowie. Probably one of the nicer prosects in the game, I met Snyder last year when i took Christopher to his first game, a Winston-Salem Warthogs vs Frederick Keys game in April. Snyder gave Chris a used baseball out of his bag and signed it for Chris who was crying because I wouldn't let him pick up trash from the ground at the stadium. Snyder then took the ball and had some guy named Matt Wieters sign it as well... I really hope Brandon Snyder makes it, if not only for the sentimental reasons, because he is beginning to show that he can hit pro pitching and is starting to make a name for himself in the minors.

Jake Arrieta: Like Brandon Snyder, most likely won't make the team out of ST but will definitely be seen in the majors this year. Arrieta is a STUD. P.A. and I hope to catch some Durham Bulls vs Norfolk Tides games this summer and see Arrieta in action. From what I have read on Roch Kubatko's blog on http://www.masnsports.com/ (read it!), Arrieta is looking great so far. He may surprise and make the rotation, but I doubt it. I think he will log some innings in Norfolk and be called up after May. Look for this guy to be a star in the years to come. 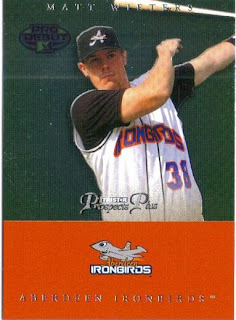 Matt Wieters: Never heard of this guy before. Destined to be a #9 hitter... haha. No, really, I'm definitely not being serious.
I have seen him in 2 different games so far and man can this guy hit. He's a big boy too. We met him in April through Brandon Snyder. I took my little brother Andy, my Mom, my wife (devil woman... oops, Mallory), my sister Christy, my son Chris (who was 2 at the time), my neice Alexis and my neice Grace, to a game in April and we all met Brandon Snyder. I had gone to the game mainly because the past 3 O's #1 picks at the time were all playing for Frederick (Snyder, Billy Rowell and Wieters). Brandon Snyder was signing autographs at the dugout and signed balls for all of us. I was interested in getting Rowell's auto as well (but he wasnt there due to injury) and asked Brandon if he was around. He said 'No, but Matt Weiters is sitting right there.' I said, really? He said, 'Yep, THE Matt Wieters.' So he called him over and had him sign balls for us as well.
We, then, got Wieters' auto again in Baltimore this past July when he was playing for Bowie. He was doing a signing along with Chris Tillman (another STUD and piece of the Bedard trade) at Sports Legends beside the Warehouse in Baltimore. He is ranked the #1 prospect n baseball. I sure hope he lives up to the hype! I can't wait to see him in the majors.
What do you think, guys? This was kind of fun. I am more stoked about the future of the clob than I have been in a long time. Who needs Tex and CC? The O's are taking the Tampa and Twins approach and building from within, which, to me, means a lot more because you can see the players grown up with the team and you grow a better attachment with them. I think it means more.
Posted by William Regenthal at 10:11 AM

above is a link to the article that I was talking about and you mentioned. I suppose David Sabino measures off-season success by the amount of money teams spend.