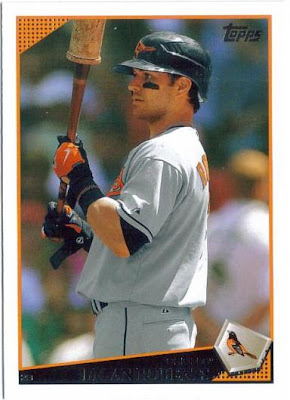 Thanks to P.A. I was able to get a taste of 2009 Topps before our boxes arrive later this week. I do have to say, i am impressed with this year's offering. I have heard a lot of comments about peoplenot liking the 2008 design; I liked it, but I am getting tired of the 'white border' design. 2008 was much too similar to the 2004 and 2005 designs. 2006 had a lot more color than the 04 and 05 offerings while the black design of 2007 was a complete 180. The sets from earlier this decade contrasted heavily with the ones from the middle of the decade. My least favorite being the very simplistic 2000 design (plus it was much too similar to the 1999 design).

I have always enjoyed throwing a Hershiser (beware- movie reverence) and changing drastically between one year and the next (a la 1975 or 1990). If I had to pick one today, i would say 2001's design and color is my favorite from this decade, but 2009 Topps would be right at the top. I really love the backs of 2009 Topps, as it is quite different from years past. I especially enjoyed on the back of Brian Roberts' card where it shows the pitchers that he has the best stats against.

I plan on writing a blog about my favorite and least favorite Topps designs, I think my bias with the 1955 set might weigh in my final decision, but we'll see when we get there, haha.
Posted by William Regenthal at 12:04 PM