A Bunch of 87 Topps From Gerard 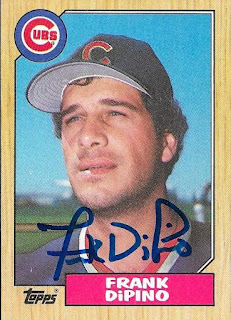 My good friend, Gerard, hooked me up with a bunch of signed 1987 Topps for my set.  I was disappointed in myself when I got them, because there were three that I already had, but hadn't removed them from my needs list.  That one is on me.

I could have sworn that my friend, Max, had already gotten me Frank DiPino, but I didn't have it in my album, so there is one in there now! 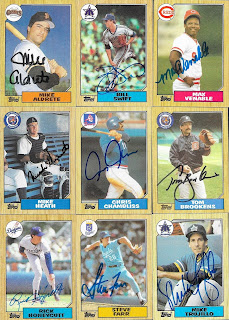 I did, however, have Max Venable, Steve Farr and Chris Chambliss.  The Venable and Farr cards that Gerard sent turned out to be upgrades.  The ones i had were signed in black, and the ones he sent were blue.  Also, my Farr was signed with a dying Sharpie, and this one looks so much better, so it worked out.  The extra Chambliss will be flipped somewhere else to make someone as happy as Gerard has made me.  He has a small repayment already in the mail that he should receive in a few days.  He doesn't know it is coming (what the surprise is, at least), but it will look really cool in his collection.

Thanks for the help, Gerard!
Posted by William Regenthal at 5:32 PM

Do you have a wantlist anywhere for your 87 autograph set? Jerry Mumphrey is signing near me in July and I'm hoping to be able to go. If I do go, I could probably track down his card and get it signed.