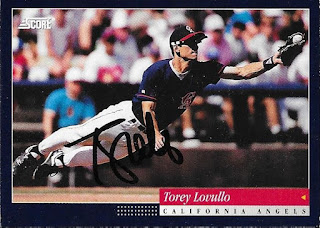 I added some 90s-era junk wax cards to my autograph album with this TTM success from Diamondbacks manager, Torey Lovullo. 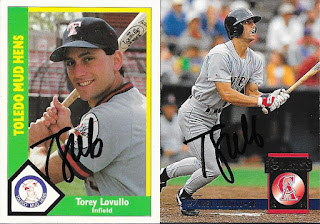 I also have a bunch of these 1990 CMC AAA cards; they came from a box that Mom found in her attic.  These have come in handy with some of the older coaches in the league.  Also, 1994 Donruss is a pretty nice, colorful set that look good when signed.

I mailed to Lovullo via Diamondbacks Spring Training on February 7 and got the cards back on April 27, for a 79-day TAT.
Posted by William Regenthal at 7:18 AM