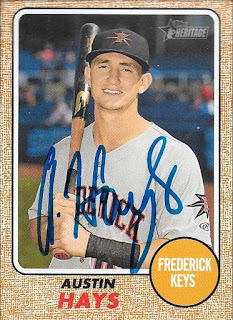 I had plans the weekend of June 1 to meet up with my friend, Ryan, and hit a Bowie Baysox game while on the way to Baltimore for a Sunday game against the Giants.  It all worked out so we were able to see Bowie on Saturday, stay the night there, and head to Baltimore in the morning.

I had been to Bowie once before, back in 2010 when Brian Roberts was there on a rehab assignment; ad he was the only player that I had sign for me.  I got him on a really nice bat.

This time around, I was fully prepped with card books, and ended up doing pretty well.  We only had cards for one Hartford player, Colton Welker, so we were fully concentrated on the Baysox as they came onto the field.  You can only get one team at a time in Bowie. 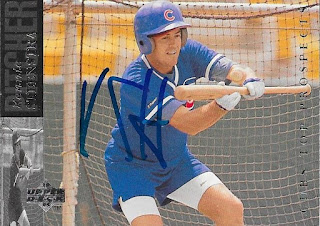 I had this Kennie Steenstra 1994 UD Minors card for years, and I was finally able to get it out of the box and into my album.  He was the first auto we got while we were there, and he was really nice. 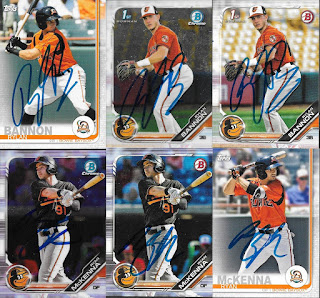 I enjoyed seeing Ryan McKenna, again.  Initially, he didn't stop, and the old man next to me had some choice words to say about him, but I reminded the guy that McKenna had to stretch, and could always come back on his way to the dugout.  I was right, and McKenna couldn't have been nicer.  I was glad to see the guy have to eat his words a bit.

Rylan Bannon was one of the pieces in the Manny Machado deal, and he now has a few Orioles cards.  They turned out really well, as did the McKennas. 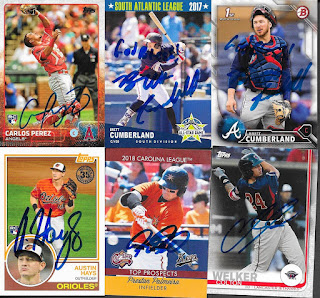 Carlos Perez did only one-per.  I had two cards of him in my book, and had I known he would only do one, I would have put the other in Chris's book.  Cumberland was one per, as well, but I was able to slip Chris a card while he was signing for Ryan.  I really wanted the South Atlantic League All Star card signed, and Chris helped with that.

We only got one Welker signed.  Chris went over to the opposing team's side after the game, and was able to get a 2019 Pro Debut signed.  We tried to wait outside for him, but he disappeared.  A lot of the players told us he was inside and about to come out, then all of a sudden we got "he left a long time ago..."  Oh well, we tried.  I'll just send the rest of what I had to my friend in Connecticut to see if he can 50/50.
Posted by William Regenthal at 7:26 AM