June 2019 Graphing of Frederick Keys at Down East Wood Ducks 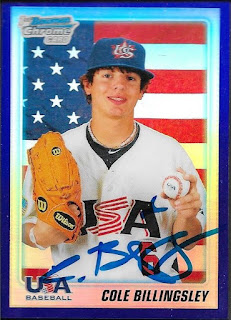 The Frederick Keys come to Grainger Stadium three times this season.  I will miss one of the series when I am at the National in August, so I was really hoping that I could get as much signed as I could when they came through the first time.

I feel like Chris and I did really well, even though I missed Dillon Tate and Yusniel Diaz.  I had been holding onto this purple Cole Billingsley since last season, and I finally got it signed.

I added a few more Michael Baumanns to the album.  The purple shimmer in the middle turned out so nice. 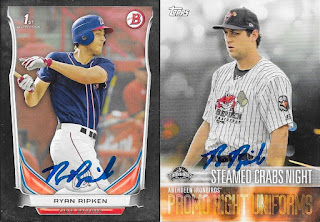 Ryan Ripken was awesome.  He stopped to talk to Chris and I each time he came by.  I could talk to him about baseball for hours. 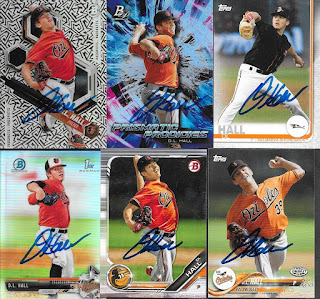 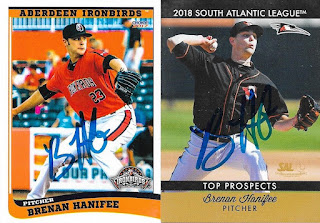 Brenan Hanifee was super nice.  He had pitched one of the games, and as he was walking off of the field, I asked if he would come back out and sign.  He came out a bit later, signed my cards, then watched some of the game with me.  While he was watching, he asked me about where I was from, etc.  He was really personable and is the kind of guy you'd want to root for. 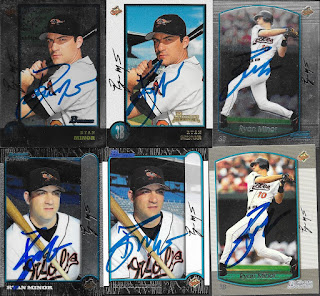 We also had good conversations with Ryan Minor.  I finished off everything I had of him, and I had a lot. 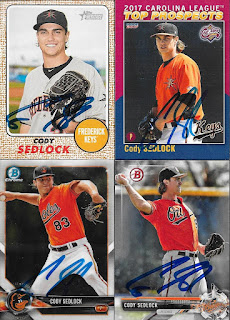 Speaking of having a lot of someone's cards, I had a ton of Cody Sedlock.  He missed last season, so I was unable to get any of his stuff signed.  He signed for us a ton, so I was able to get most of what I had signed this series. 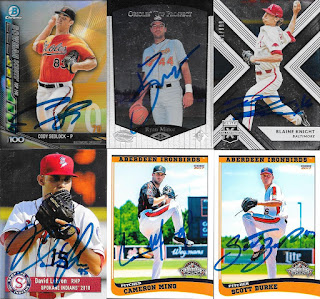 I got a bunch of team set stuff done, as well. 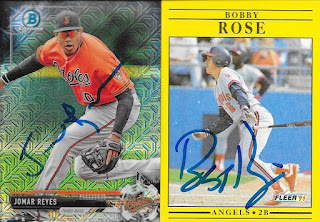 I had found this Jomar Reyes at a card show, and had hoped that he would be back.  I was lucky that he was, and got it signed.  Chris had some of his cards, as well.  He asked Jomar if he was Jomar Reyes, and he said no.  Then he smiled and signed Chris's cards.  Chris was so confused. 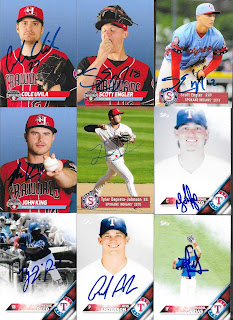 I got some more Hickory and Spokane team set cards done, along with some customs that a fellow instagrammer made.  I think it is about time for him to replace his ink in his printer.  The customs do look better in person. 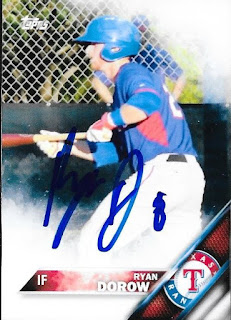 I was glad that he made an extra Ryan Dorow, as I don't have much of him, and I would venture to say that Dorow is this year's team MVP.  He plays great defense and is batting pretty well for a 30th round pick. 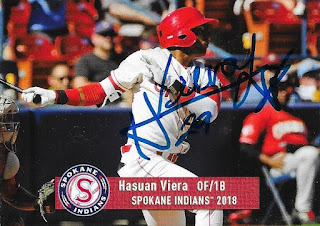 Here is the long horizontal card that I got signed, the newly arrived Hasuan Viera. 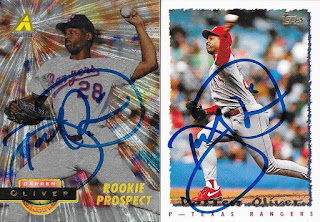 I always run with Darren Oliver cards in my book, and I was fortunate that I do so, because he was subbing for Steve Mintz at pitching coach.  He is one per, so Chris and I both got one done. 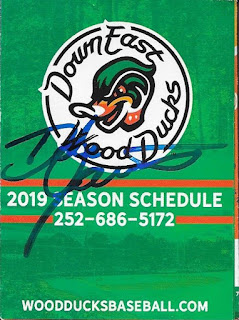 Finally, my friend Jackson, let me in on a little secret.  There was a famous spectator at Grainger Stadium, former NASCAR champion, Dale Jarret.  He was there watching his son, Zach.  Zach is a fellow Charlotte 49er, so I had to make sure I talked to him.

The Wood Ducks are off until Thursday, when the second half starts.  I'll be seeing them play Salem.
Posted by William Regenthal at 7:23 PM