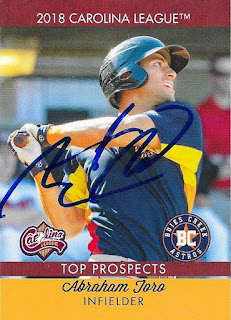 It's really nice having someone in Texas who can take former Buies Creek Astros (now Fayetteville Woodpeckers) and former Wood Ducks.  My friend, John, in Texas has been helping me get some cards taken care of that I wasn't able to finish last season.  He helped me complete my Wood Ducks team set, and also some other stuff that I had in my box. 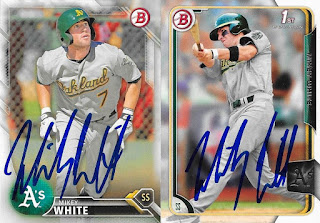 John also took some 50/50s for the Midland RockHounds, which was nice.  I don't see any A's players ever, so it was nice to be able to get some of those guys out of my box and into my album. 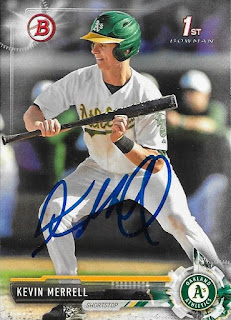 I love the A's colors on cards, so getting any of them signed is really nice. 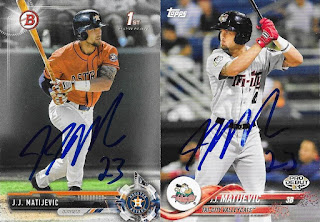 John got me some cards signed by JJ Matijevic that I missed last year.  I didn't see him a whole lot, so it was good to finish off what I had.  That being said, I heard he is back in Fayetteville for a while. 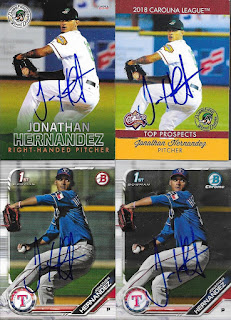 John has been very instrumental in getting Jonathan Hernandez cards signed for me.  He moved up to Frisco before the team set and Carolina League top prospects set came out.  I was also able to get a couple 2019 Bowmans signed. 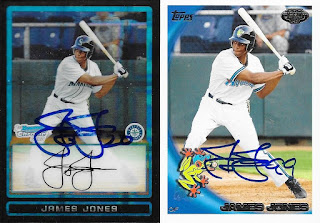 I don't know how long I had these James Jones cards in my box, but John helped me get them signed.  He wasn't with the Wood Ducks for very long last season, but he was really cool when we did see him. 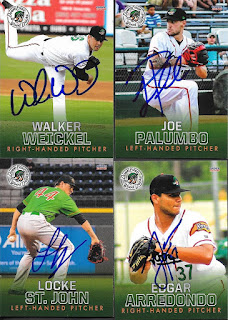 Finally, I'm fairly certain these cards wrap up my Woodies team set.  If they don't, then I know I'm really close to being done with it.

Thanks for getting all of these cards signed, John!
Posted by William Regenthal at 6:15 PM