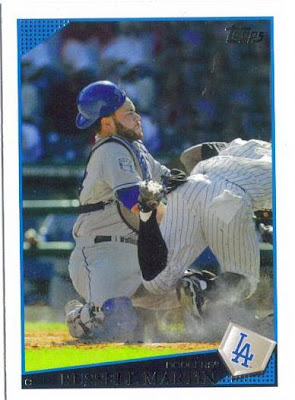 A by the numbers blog will follow, but I have completed my 2009 Topps set. This is by far, one of my favorite sets that I have ever completed. Along with the great photography that was featured this year, it will have sentimantal value as well because it has brought me together with a special group of friends in putting this together. P.A., Pete, Kim and Max, its been a blast working together getting this set put together. I will have more on this later as well!! Since I had all the cards for this set in the 6 total Jumbo boxes of Series I and Series II, I get to pick the completer card... I chose Russell Martin because I think it symbolizes the group effort that this set became.
Posted by William Regenthal at 5:00 PM

well, the guy is canadian, and has, what, 8 middle names??