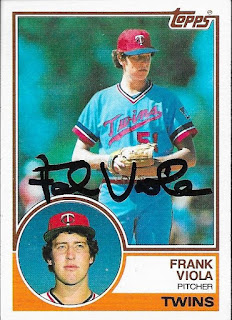 I've been getting some bigger names in through TTMs lately, mainly as I keep trying to add to my 1987 set.  This time around, I received a success from Frank Viola.

One of the cards I got back was this nice 1983 Topps rookie card.  I had forgotten that I had his rookie in my 83 box, but found it and sent it along. 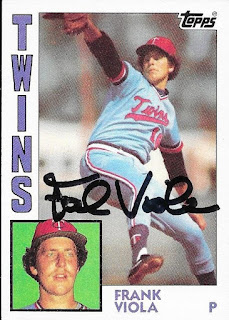 This 1984 Topps also looks nice.  I almost passed on sending this one, but figured, why not, so I sent it.

This was a great TTM success, as it knocked off three cards from the 1987 set.  I am working on some ideas for the 1987 checklists, but at the moment, I have been sending them to some TTM guys, and I figured that Viola would be good one one of them.

Since he is pictured on the 1987 Twins Leaders card, I was able to knock that one out as well.