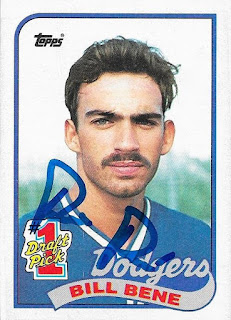 My TTM stack is getting bigger, and I am way behind on posting again, but that is a good problem to have.  I've sent out a ton of TTMs lately, and have gotten some really good ones back.  I've also gotten some back from some players who may not be household names.  This success from Bill Bene is one of those examples.

I liked how this 1989 Topps looked, and it turned out really nicely with his signature.