Gerard Hooks It Up With Some Red Sox Autos 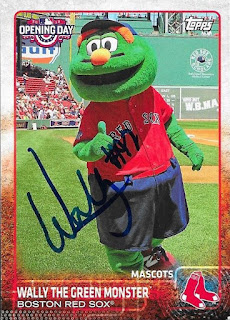 My good friend, Gerard, recently went to Red Sox Fest, or whatever it is called.  I get all of the names mixed up.  Anyway, he hooked me up with a bunch of autos while he was there.  I wasn't expecting this 2015 Topps Opening Day mascot card back signed, but Gerard got it done.  Now, I have a mascot in my binder. 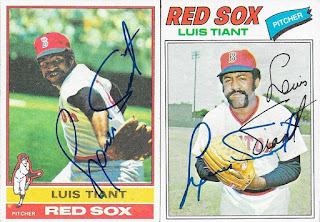 Gerard was able to get two cards signed for me from the legendary Luis Tiant.  I have Tiant on a ball, but needed a couple cards for the albu,.  I think they both look great.

Here are a couple of the other cards that Gerard got me.  I think I provided the Marrero, but I don't remember if I sent him the other two or not.  Still, I like them.  I'm not sure what Vazquez signed his card with, it looks like a paint pen. 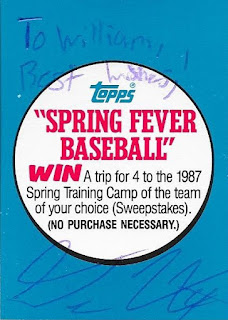 Finally, I have a huge stack of these Topps Spring Fever Baseball entry cards for some reason.  Instead of recycling them, I figured I would send some out to my graphing friends who do Spring Training, and Gerard was the first one to send one back.  These will go in my album just like any other signed card.  I feel like it is a nice way to commemorate some of my friends who contribute to my album.

Thanks for the autos, Gerard!  Have fun at Spring Training.
Posted by William Regenthal at 10:42 AM