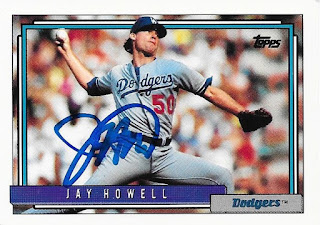 This TTM success from Jay Howell helped me get another 1987 Topps for the set.  I also got this awesome 1992 Topps taken care of, which looks great.  I like the horizontal cards, of course, and this one really looks good with the blue Sharpie.

I mailed to Howell on January 22 and got the cards back on January 29, for a 7-day TAT.
Posted by William Regenthal at 6:58 PM