Dad is in The Hall of Fame 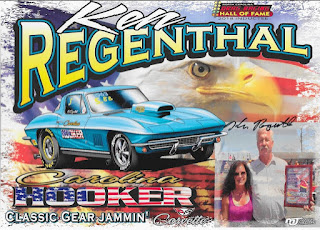 After 40+ years of drag racing, my dad was inducted in the North Carolina Drag Racing Hall of Fame this past Saturday.  I attended the ceremony and car show at the Greensboro Coliseum with most of my family.  It was a lot of fun, and it was really cool seeing Dad get some recognition. 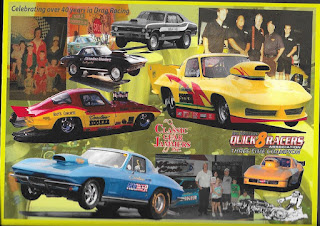 In his career, he has never had the photo handouts that a lot of racers have at events.  Finally, some were made, and they turned out really great.  The front of the handout is at the top of the page.  Of course, I had Dad sign some of them, so I could hand them out to some of my trading partners.

The back of the card is the collage of photos shown above.  I'm actually on the card twice, which is really cool.  I think Mark Joyce of MJ Printing & Graphics did a great job on this.  He had designed Dad's t-shirts for years. 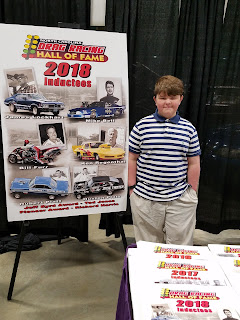 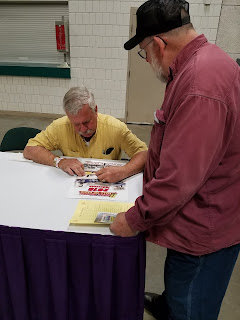 It was a little weird being someone who pursues autographs watching people "graph" my dad.  He enjoyed it, and had quite a few people come up and ask for his autograph. 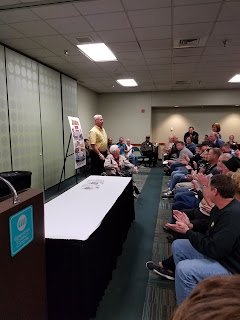 Dad had to give a speech accepting the induction, and at the conclusion, the folks there had all of our family stand (because our family is so huge).  They also had Dad bring my grandmother to the front of the room, which was a really cool moment. Part of the deal was a car show, and Dad had his car on display.  I really enjoyed looking at some of the old race cars, and talking to some of the drivers.  In attendance was former multi-time NHRA Pro Stock World Champion, Warren Johnson, whom I was able to speak with for a few minutes.  I also enjoyed a long conversation with former Pro Stock racer, Jerry Eckman. 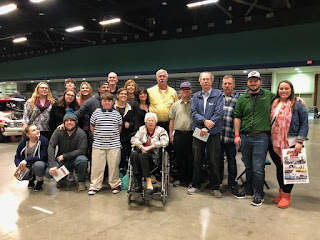 Most of the family was able to attend, which turned it into a bit of a family reunion.  My wife was unable to attend, as she had to work.  I recorded Dad's induction speech so she would be able to see it.
Here is the YouTube video of Dad's speech.  I helped him prepare for it a bit, and he did really well.  I hope he was able to tell how proud I am that he received this honor.
Posted by William Regenthal at 5:21 PM