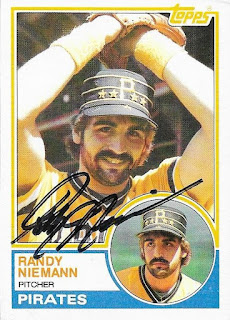 It took me two shots, but I was able to get a TTM success from Randy Niemann.  This 1983 Topps is really cool, with the pillbox cap of the Pirates.  I like the old Pirate uniforms, and this is a great example of them.

I also got Niemann on an 80 Topps in an awesome Astros uniform.  He is also in the 1987 set, so this was another card to knock off of the list.

I mailed to Niemann on January 8 and got the cards back on January 31, for a 23-day TAT.
Posted by William Regenthal at 5:35 PM