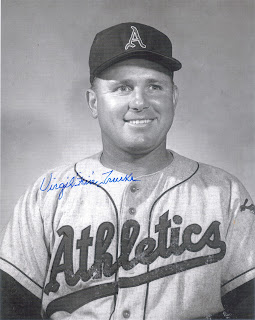 I sent an email to my friend (and friend of the blog) Mr. Don McNair last week letting him know that Virgil Trucks had passed away.  Mr. McNair's father, Eric McNair, and Mr. Trucks played on the 1941 Tigers together and both had been members of the Philadelphia/Kansas City Athletics organization in their careers.  Mr. McNair (Don) had met Mr. Trucks during an Athletics Alumni luncheon a while back and conversed at times.  On one of those occasions, Mr. Trucks sent Mr. McNair a signed photo.  Well, when I mentioned to Mr. McNair that Mr. Trucks had passed, I made a comment about how I wanted to get a nice photo of him to put on my wall in my 'man cave.'  Mr. McNair responded and said "Don't buy one.  I have one, signed, that I will put in the mail to you!"  The photo arrived today.

I'm so lucky that I have been able to interact with some really nice folks during the life of this blog.  It makes the collecting experience that much more fun and rewarding.  I think, aside from Mr. Trucks, I have conversed with Mr. McNair the most about the hobby and the history of the game.  I really wish there were more folks like them so that the rich history of the game could be passed along so easily.

Thank you again for the photo, Mr. McNair, it is definitely in good hands!
Posted by William Regenthal at 5:59 PM