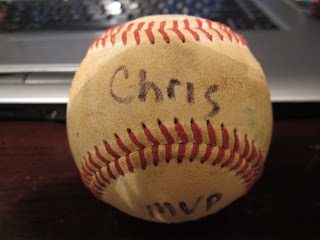 Christopher played his fourth game of Rookie level ball tonight and recorded his first hit of the season (a single).  He moved to second when the next batter singled; moved to third when the batter after that singled and then scored when the next batter hit a double.  Chris is one of the smallest kids on his team.  They are 7-8 year olds and a good portion of the kids played on this same team last season.  Chris has a lot of catching up to do with the other kids on the team, skill and size-wise.  He went a long way toward that tonight! 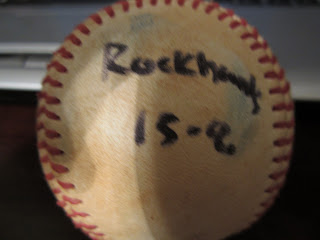 Coach was proud of Chris getting his first hit, hustling hard to each base and listening to him when he gave instructions, so Chris was awarded with one of 3 game balls for tonight's win against the Lugnuts.  You can see that Coach wrote Chris' name on the ball, inscribed it 'MVP' and put the score, Rockhounds 15-8.  I will put the ball in a cube and display it with my HOF balls.  I'm so proud of him right now, I don't know what to do!
Posted by William Regenthal at 9:39 PM

Congrats! First of many game balls.

Very, very nice. Don't need to have that one authenticated. Better than any pack hit.

Congrats! And way to go Christopher!

Congratulations Christopher! First of many I'm sure. How awesome of his coach to recognize such an awesome effort.