Auction Winnings - One of the Killer B's 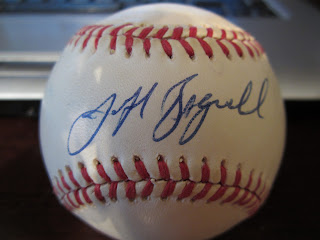 The last ball I have to show off from my recent auction winnings is this Jeff Bagwell signed baseball.  I got this in the auction lot with Frank Thomas from Collect Auctions.  I got a really sweet deal on the two baseballs.  The ball is a William White ONL baseball.

He has been eligible for the Hall of Fame the past 3 years, garnering voting percentages of 41.7%, 56.0% and 59.6%.  Many writers have been leaving him off of their ballots because he 'looked like he did steroids.'  That's crap.  the guy deserves to be in.  Period.  I'm hoping he and Craig Biggio are elected in the same year and go in together, since the both of them played alongside each other for what felt like forever.  I know he will get in eventually.
Posted by William Regenthal at 5:41 PM