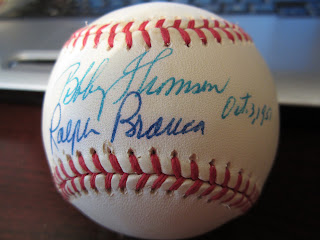 I had another foray into bidding with Collect Auctions a couple weeks ago since I was so happy with what I got last time.  I bought three baseballs (out of 2 auction lots) this time, for very awesome prices.  The first ball I will talk about is the above dual signed baseball by Bobby Tomson and Ralph Branca.

The ball holds significance in that it is signed by both parties involved in the 'Shot Heard Round The World.'  The ball itself is inscribed with the date of October 3, 1951, which is when Thomson hit a pennant clinching home run for the Giants against the Dodgers.

When both teams finished the regular season with identical records of 96-58, a one-game playoff was necessary to determine who would face the Yankees in the 1951 World Series.  This was long before the one and done Wild Card play in game; long before the advent of the NLCS, etc.  This was a one-game winner goes to the World Series game, and when Thomson's shot cleared the fence, he etched his name into the history books for all time.

Branca and Thompson signed baseballs commemorating the event for years afterward, up until Thomson's death in 2010.
Posted by William Regenthal at 12:49 PM