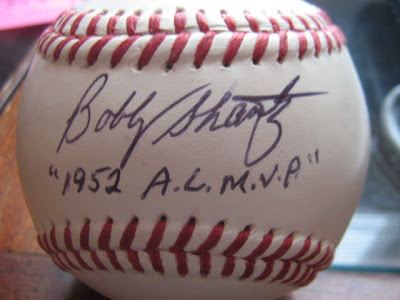 I mailed to Bobby Shantz on February 26, 2011 and received this signed ball on March 24, 2011 - about a month TAT. I was afraid that this one wasn't coming back, but it did. This was also one of the last balls that I sent out before I suspended TTMs (ok, just so you all know, we are in the process of closing on a house and moving, so that's why I suspended them). I still have several TTMs outstanding, but I don't plan on sending any out until after we close on the house (April 5th).

and he's a 8x gold glove winner too!!