So, I have to preface this entry by explaining my relationship with the individual who made this entry possible. I have known my friend Mike for 17 years (ouch). We met at church camp (you read that right) after my 8th grade year and we hit it off. We kept in touch as pen pals in the years that followed. When I got an apartment to myself during college, Mike was wanting to move from Florida to North Carolina for a change of scenery. We talked about it briefly and decided that we'd give things a try as roommates. We lived together up to about a year before I got married, when he decided to move back to Florida.

It's never easy rooming with friends, so needless to say, our relationship has had its ups and downs. We have, however, been able to overcome any issues we may have and remain close to this day. I've been there when he has needed me and he has been available whenever I need his support. He'd probably jump in front of a train for me (it might not be a moving train, but it's the thought that counts).

One of the things he and I have in common is a shared love for Professional Wrestling. We would have Pay Per View parties every month whenever WWE PPVs were on TV. This is how I taught myself to make my awesome wings. Mike and I have a similar tase in the actual wrestlers we like as well. When Mike emailed me last month to tell me that he was going to meet WWE wrestler Chris Jericho at a book signing in Tampa, I was amazed. Mike said that if things went as he had planned, he would at least get me a copy of Jericho's book signed. I emailed him back to see if Mike would be willing to see if Jericho would be willing to sign a baseball as well (since it is obvious that I collect autographed baseballs). Mike said that he would give it a shot.... 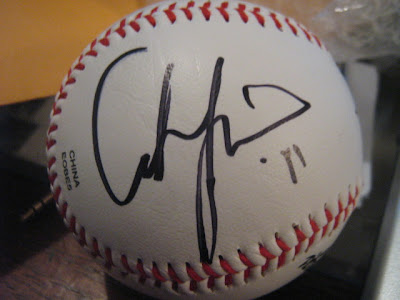 Behold, my Chris Jericho autographed baseball that came in the mail today. It looks GREAT! I'm really happy that Mike came though for me. He has come through in the past, landing autos from Big Show and Eddie Guerrero several years ago. Most WWE wrestlers choose the Tampa area to live, so he gets lucky in that he can catch a good many of them at various events. 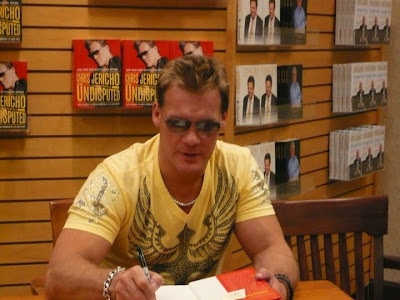 I can't say how appreciative I am that my buddy Mike hooked me up. Let's put it this way, I named my cat Jericho. He's definitely one of my favorite wrestlers of all time and I think it's great that I have his signature on a ball.

Thanks so much Mike! You're the man, and you know I appreciate it, for sure!!!!!
Posted by William Regenthal at 6:34 PM

You're welcome, glad you like the ball, can't wait till you get the book.

Thats definitely a neat pickup and a great gesture by your friend! I bet your one of only a few people if any people who own a Chris Jericho signed baseball now! Congrats!

ASK HIM! ASK HIM! hehe. That auto is awesome. You'll have to let me know how the second book turns out. I've been interested in reading his books but never think to look for them. You're going to WRESTLEMANIA in a few weeks so hopefully you can snatch up a few autos there as well.

Sweet auto dude. I personally dislike the guy but to each his own.

Mike - Yeah man, I can't wait either. I loved his first book and I want to see what he does with the second one.

Drew - I'm sure I'm one of the few who has a signed ball by him. Mike got one for himself, too.

Pete - My sign for Wrestlemania is going to say ASK HIM. We're in full countdown mode here.

BCR - Do you personally dislike Jericho as a person, or as the character? If you read his first book, he goes into detail on how/why he plays the character the way he does, and that gave me a whole added level of respect for what he does. I'm not sure of any other wrestler who can play a bad guy like he does, save for maybe Ric Flair.

William, WCW people just really get on my nerves. I just don't get them but that's ok.