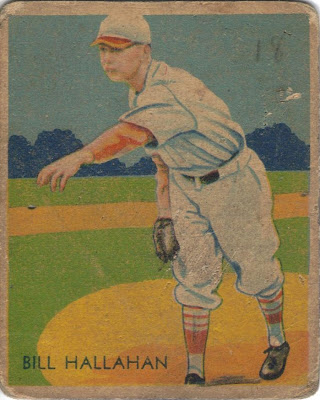 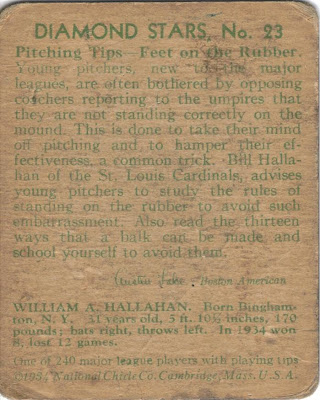 It occurred to me that it has been a while since I dug out a 'Hidden' card to talk about on here. I've been really busy lately with life stuff that I will reveal shortly. I will tell you, however, that what I have going on is a good thing, but it has ground my collecting to a halt. I have also suspended my TTM requests until after I have this event taken care of. No, we aren't having more kids. Don't even think about that.

Now, I was looking around on my laptop and saw that I had scanned the above 1934 Chicle Bill Hallahan card a while back. I remember getting this card at a card show. It was on one of those discount tables, and I had to have it. This is the only vintage Chicle card that I have. I'd like to add more to my collection at some point, but like I said above, it will be a little bit before I can make any significant additions to the collection.

I believe that I got this card for a couple dollars. I think I was at a show with Max and he was able to get a pretty beat up Steve Garvey rookie card from the same table. I'd say head over to his blog and look for it, but he hasn't posted in so long, there's probably cobwebs in the corner.

Wow, that's a really nice card. Didn't know you owned any of those! Nice!