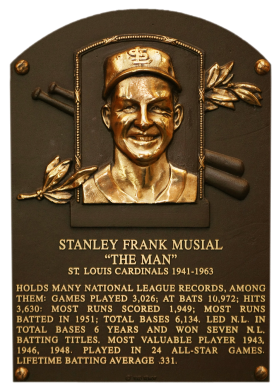 I usually do a section on here of do they deserve to be a Hall of Famer, and a final verdict. I don't think that would be necessary in Musial's case. I do believe that he is one of the most overlooked players in the 'Greatest Player Ever' debate. However, if you were wondering - YES, Musial is a Hall of Famer. No doubt in my mind. I wonder why he only got 93.2% of the vote and not more? Ridiculous. He should have 100%.

You can get Musial's auto pretty cheaply online. The best place to go is his official website: http://www.stan-the-man.com/. I got a ball from there last year for $100.00. 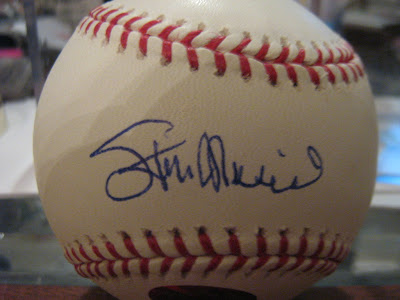 I've also heard that some people have been lucky enough to get Musial TTM, but it's a real crap-shoot and I'd recommend that you save some time and go through his website instead.

Did you know that since Bob Feller passed away in December, Musial is now the longest tenured living Hall of Famer? He has been in the Hall since 1969 (almost 43 years).

Posted by William Regenthal at 2:26 PM

Nice summary! Glad we were able to honor Stan today, it was fun!

Great stuff. As amazing as the "All Time" records are, check out how many Major League and National League records he held when he retired: 17 Major, 29 National, and 9 All-Star!

Highly doubt anyone has or will do that ever again on retirement.