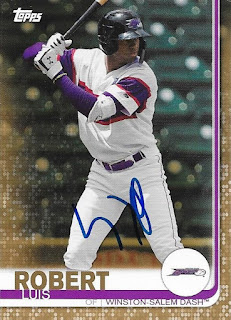 I submitted some White Sox cards to a kid named William who goes be the handle "memorabiliamadness" on Instagram.  He was attending this year, and since my friends Max or Anthony weren't going, I went ahead and hooked William up with some cards.

He took a bunch of my White Sox base cards off of my hands, and instead of paying me for them, he offered to get a few cards signed for me.

I was especially excited about the above 2019 Topps Pro Debut Luis Robert gold parallel that William got signed for me outside of the event, before it even started.  He was afraid that he wouldn't be able to get it signed, and he was able to knock it out early. 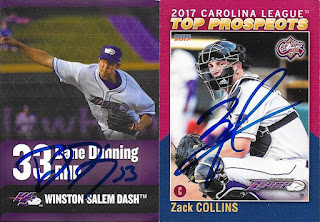 He also took care of some team set needs that I had.  The above Dane Dunning Dash card actually used to belong to a kid Chris and I knew from Wood Ducks games.  Since the kid has since unfollowed us and is no longer talking to either of us, I guess the card is mine.  He ended up becoming too cool for cards anyway, so I'll happily add another Dunning to my album.

William also got two 2017 Carolina League Top Prospects Zack Collins cards signed for me.  I have several cards left from this set, so I was glad to get two of them out of my box.  Chris got the other one.

Thank you so much for getting these cards taken care of for me, William!
Posted by William Regenthal at 4:28 PM