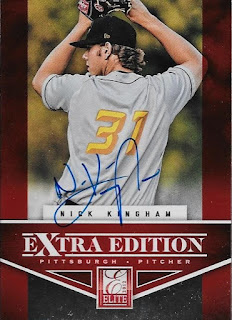 Here are some nice cards that I got back from former Pirates and Blue Jays pitcher, Nick Kingham.  I had seen that he was signing, and I thought I had a ton of his cards, but it turned out that I only had one.  The above 2012 Elite Extra Edition was found at my LCS.  I picked it up and added it to the TTM request with the 2018 Topps Update below that was in one of my boxes. 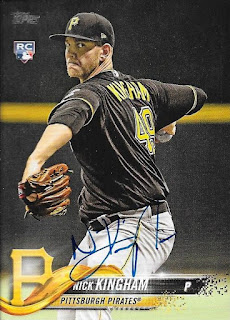 I guess I gave the other Kingham cards that I had to friends of mine who are Pirates fans.  That has to be why I thought I had them, but didn't.

I mailed to Kingham on January 6 and got the cards back on January 17, for an 11-day TAT.
Posted by William Regenthal at 4:17 PM